I really didn’t want to get out of bed at the comfortable Fosshotel Reykholt.  One of the drawbacks of taking a vacation package is the strict adherence to the group’s schedule, and this morning, that schedule is packed with a trip to the Snæfellsnes Peninsula and (horrors of all horrors!) a date at Bjarnarhofn for an extreme taste challenge with the rotten shark. 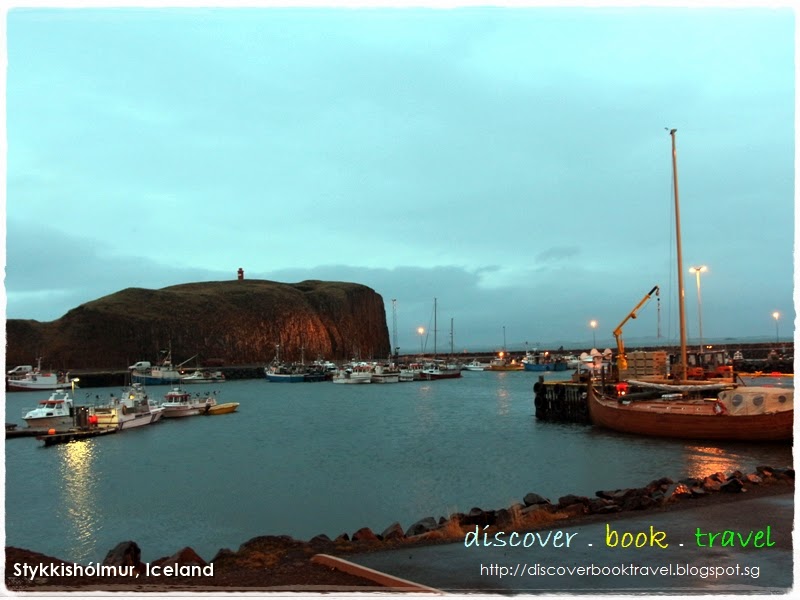 And so our day had to begin in the wee hours of the morning, travelling from the comfortable Fosshotel Reykholt to the charming fishing town of Stykkishólmur.

Best thing to do at Stykkishólmur – Crusing the Breiðafjörður Fjord 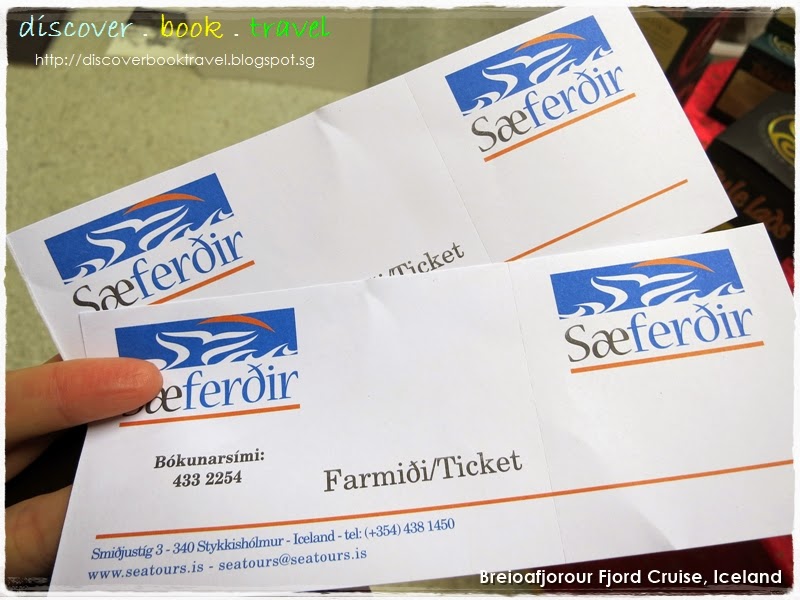 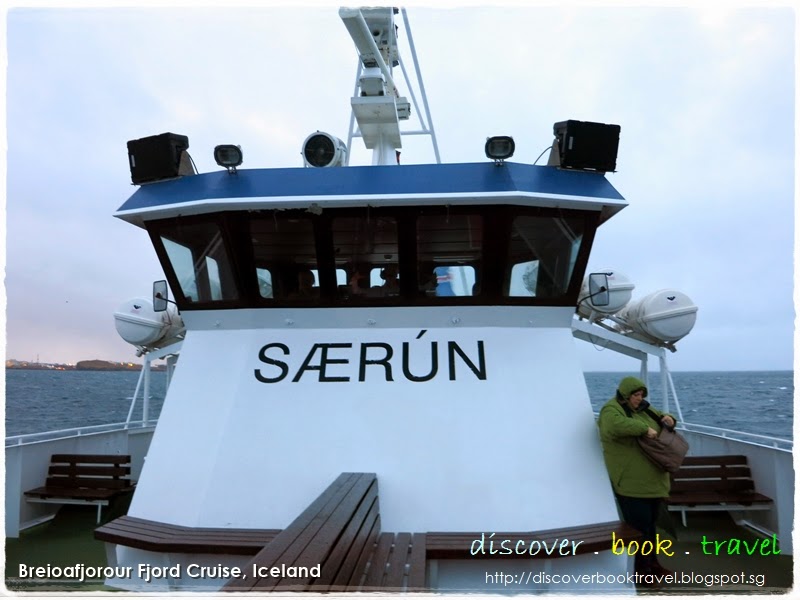 Sailing off from Stykkishólmur. 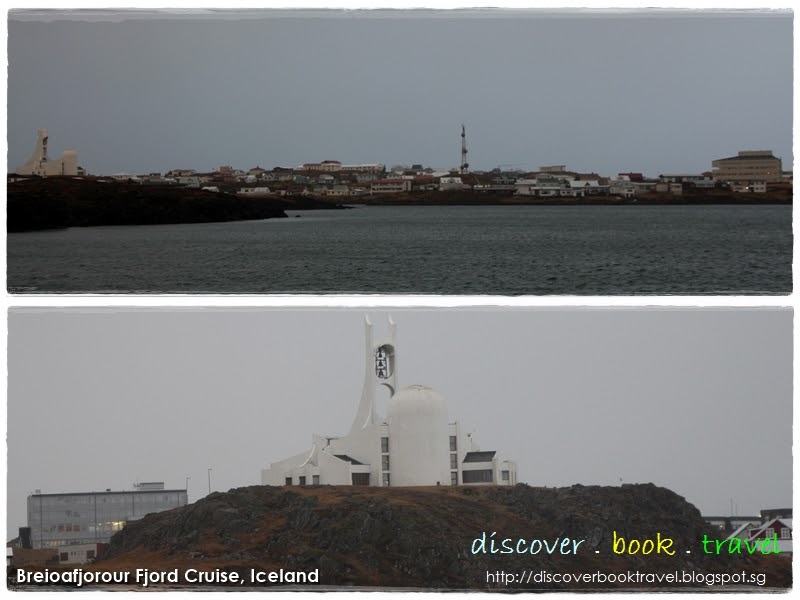 The Snæfellsnes is a peninsula located along the western coast of Iceland, jutting out like a long arm with a clenched fist at its tip.  In many ways, the Snæfellsnes Peninsula is like a miconism of Iceland and is also called “Iceland in Miniature”.  The volcano at the tip of the peninsular was the inspiration behind the famous classic by Jules Verne, “Journey to the Centre of the Earth”.   A photographer’s paradise, the Snæfellsnes Peninsula makes for a great excursion for sea-lovers. 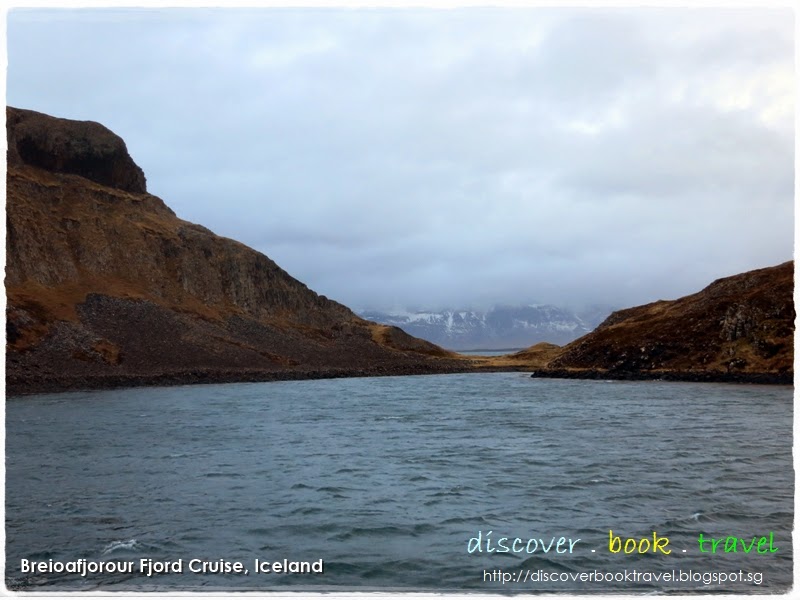 A rugged mountain chain runs along the length of the Snæfellsnes Peninsula. 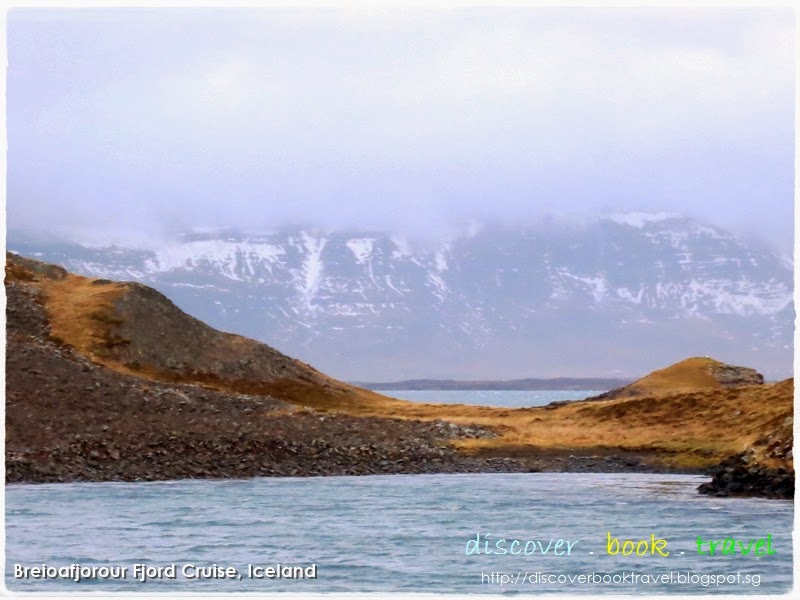 According to Icelandic legend, Breiðafjörður fjord is populated with so many islands that they are deemed to be uncountable. 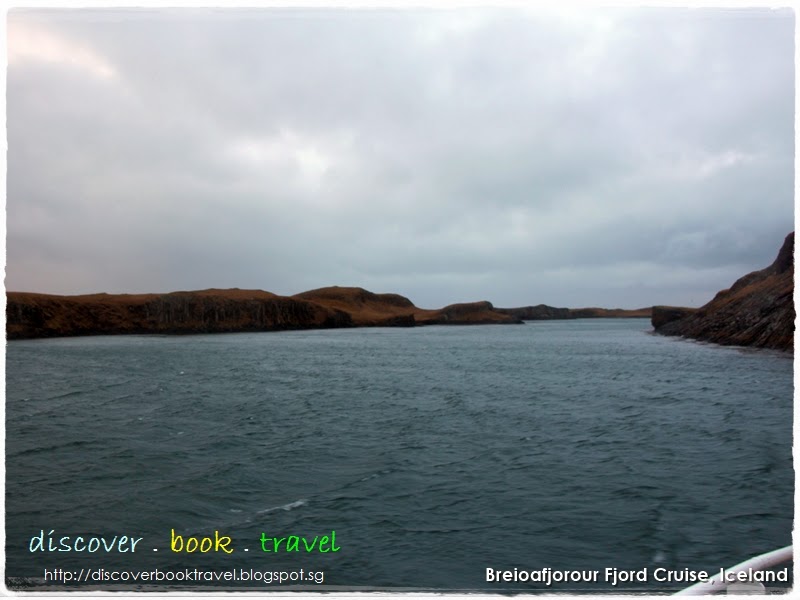 In summer time, seals, and a multitude of colourful seabirds including the famously distinctive puffin can be seen up close in the islands! 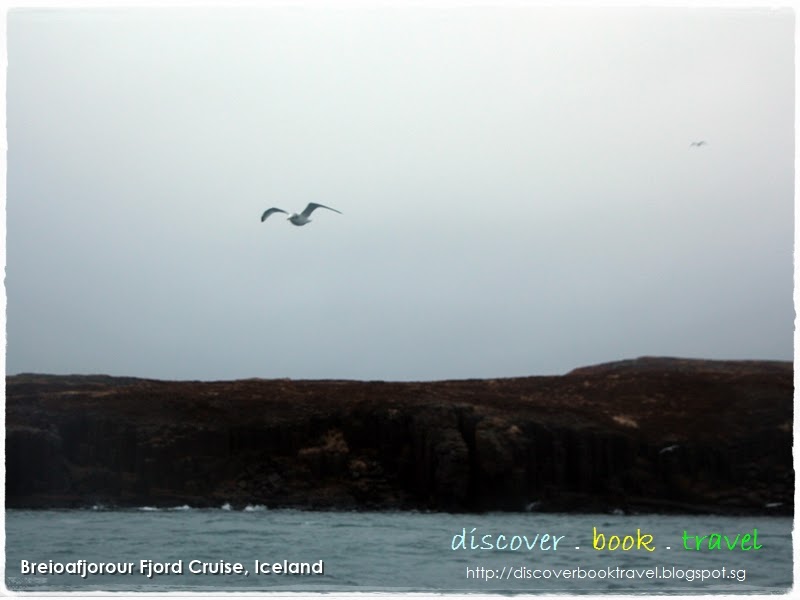 Caught on camera – a seagull hunting on the ocean surface. 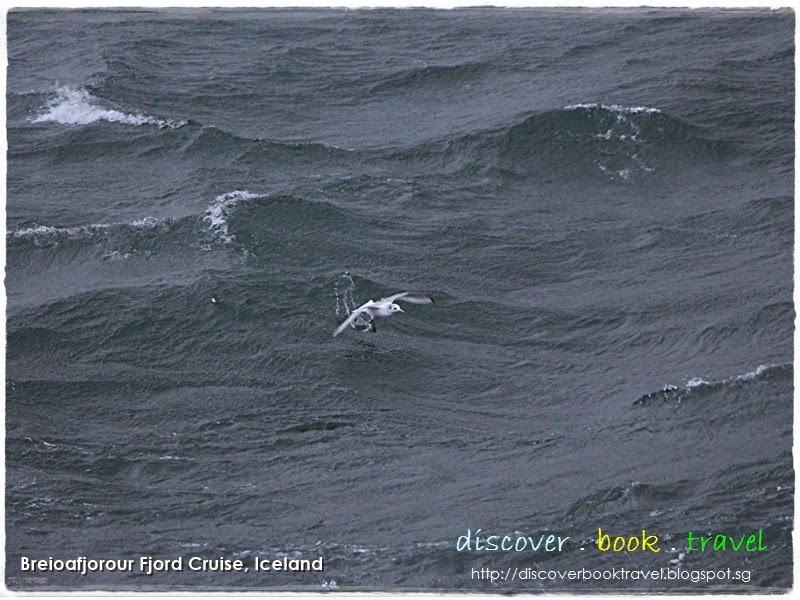 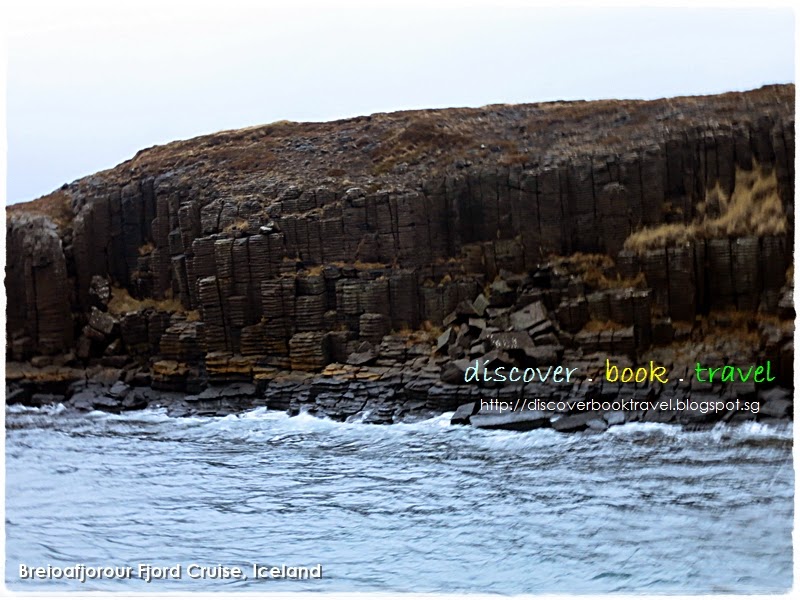 But it is rare to find them jutting out of the ocean, although I believe there must be an underwater volcano somewhere…. 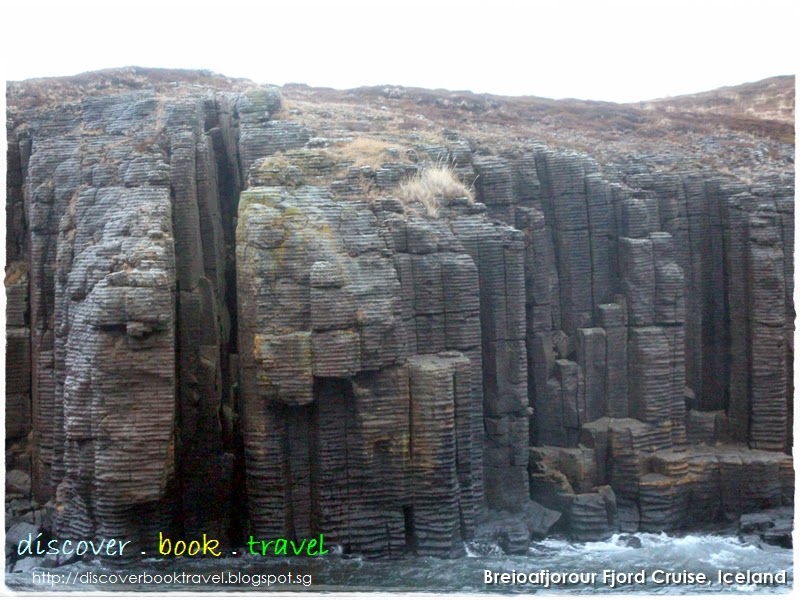 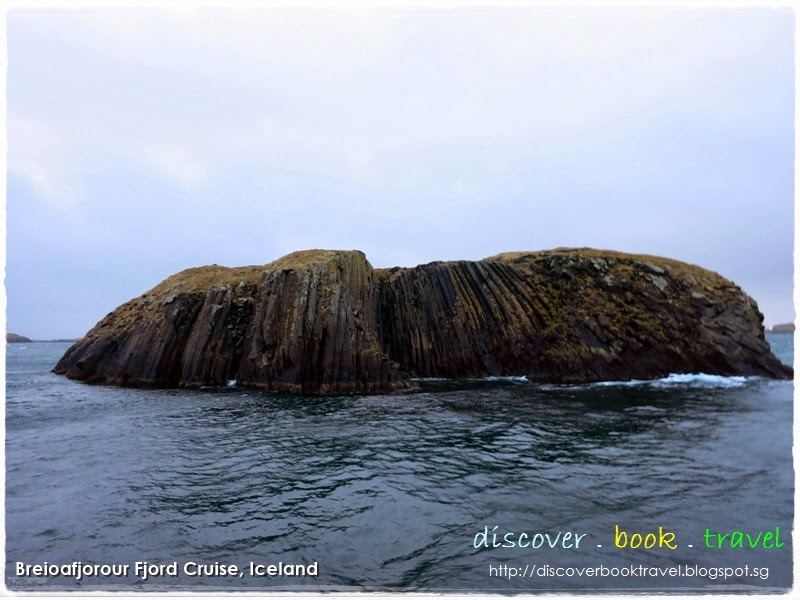 As the Snæfellsnes Peninsula extends directly into the Atlantic Ocean, the area tends to be very cold and windy, especially on a November day!

Seafood straight from the Atlantic Ocean

Personally speaking, the highlight of this cruise was neither the scenery nor the wildlife (which didn’t account for much as it was winter), but the ocean dredge that took place mid-cruise.  A large trawling net was sent deep into the Atlantic Ocean at cruising speed for around 10 mins. 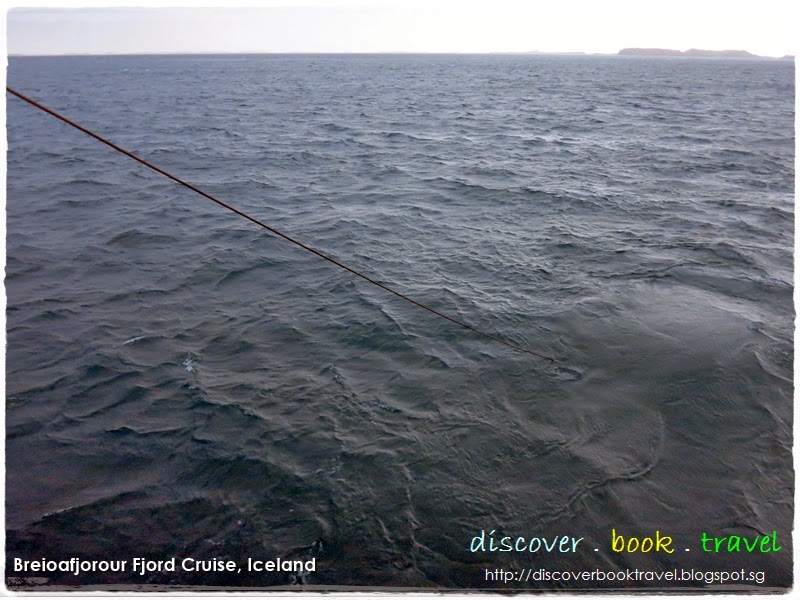 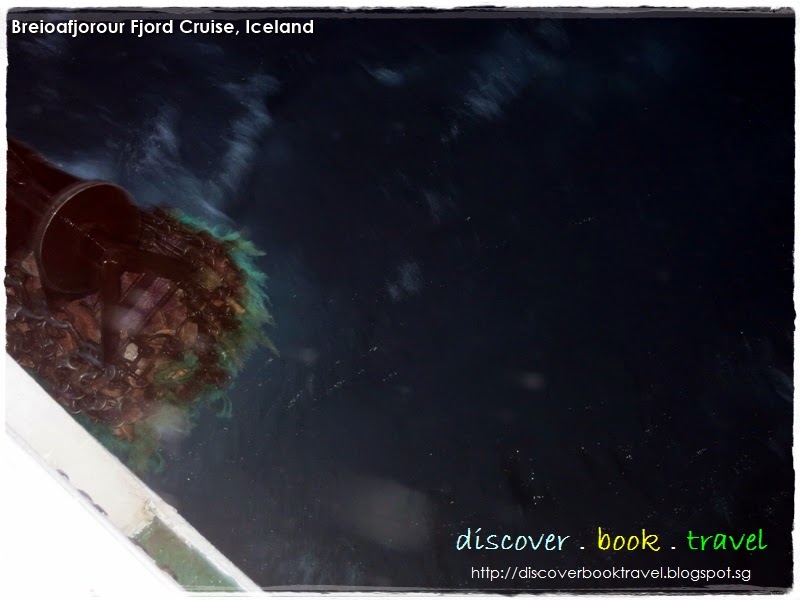 Look what treasures we’ve got from the trawling net! 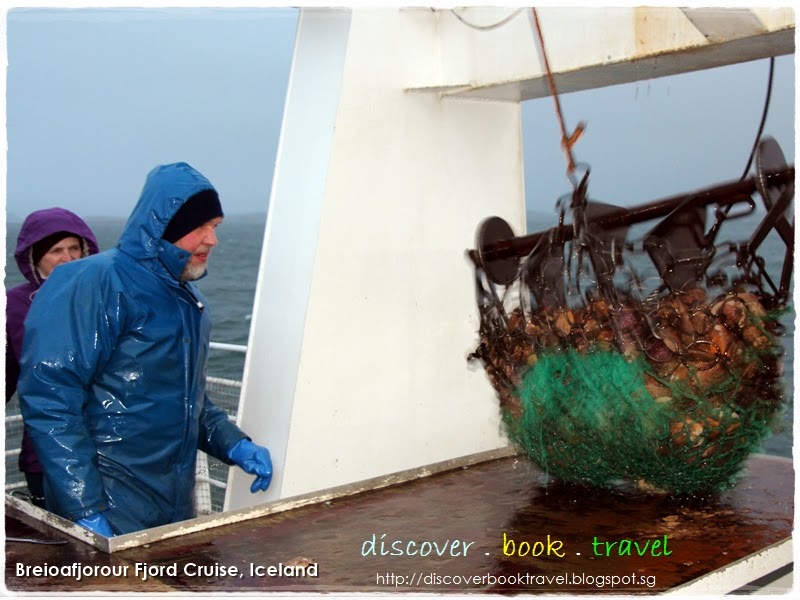 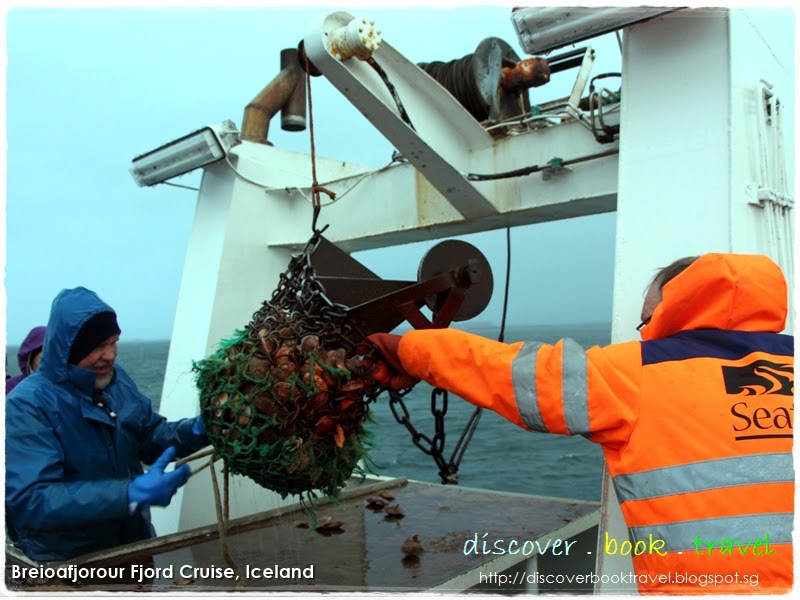 A whole lot of sea urchins and marine organisms were scraped off from the ocean floor.  Sushi, anyone? 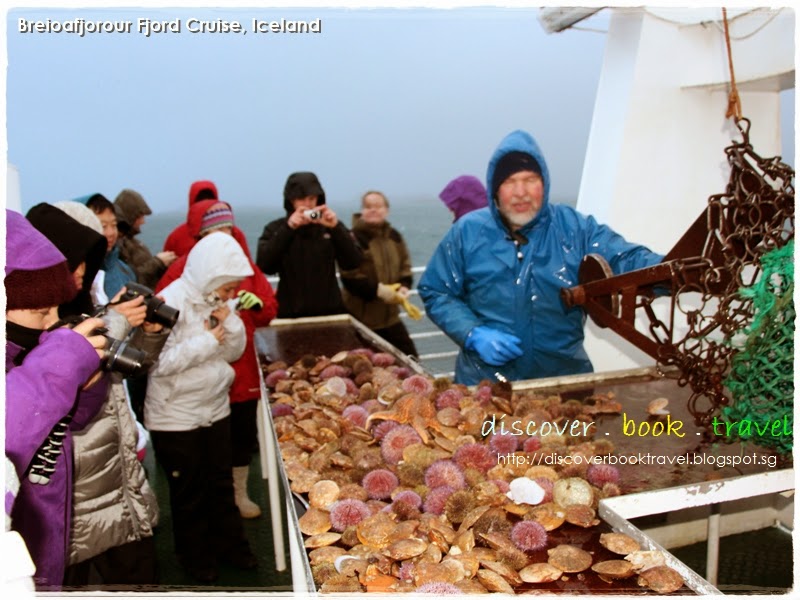 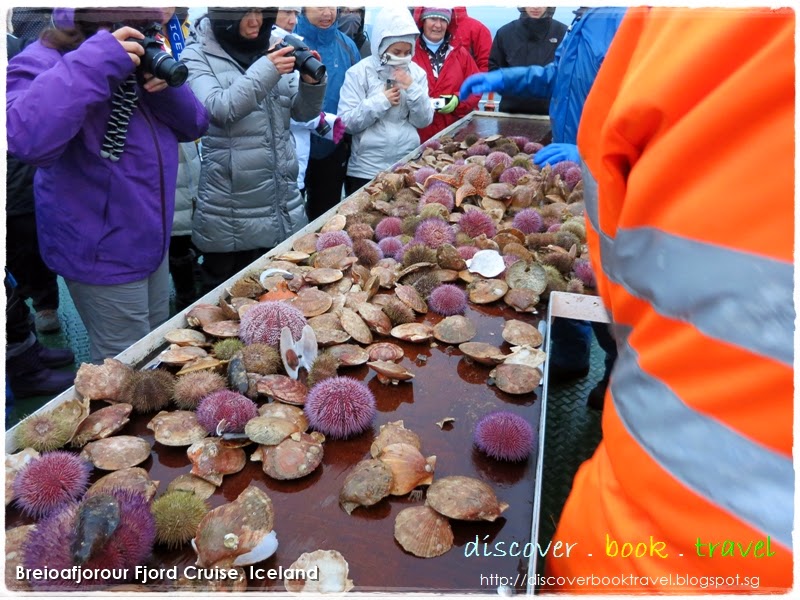 Everyone was entranced with this huge star fish caught in the net. 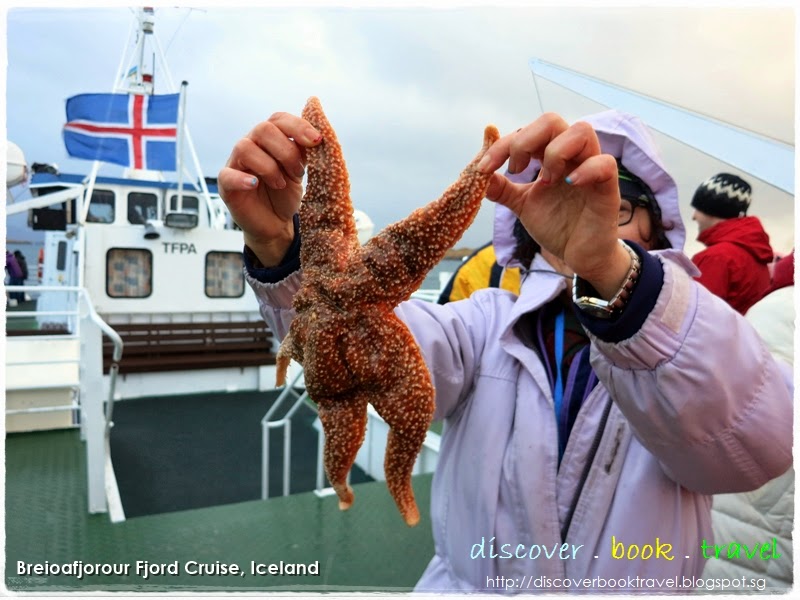 No one noticed this little creature crawling desperately away, so I saved it (I presume it to be a marine snail) by putting it back into the sea when no one is looking. 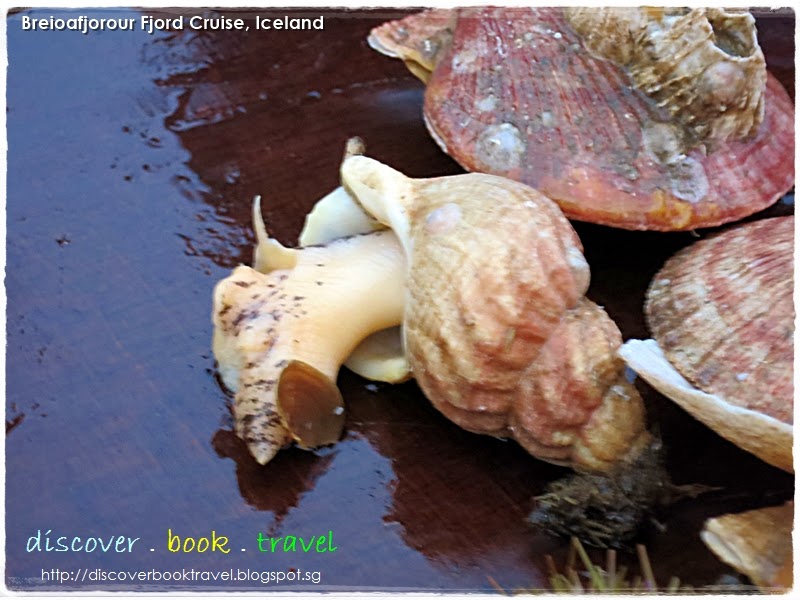 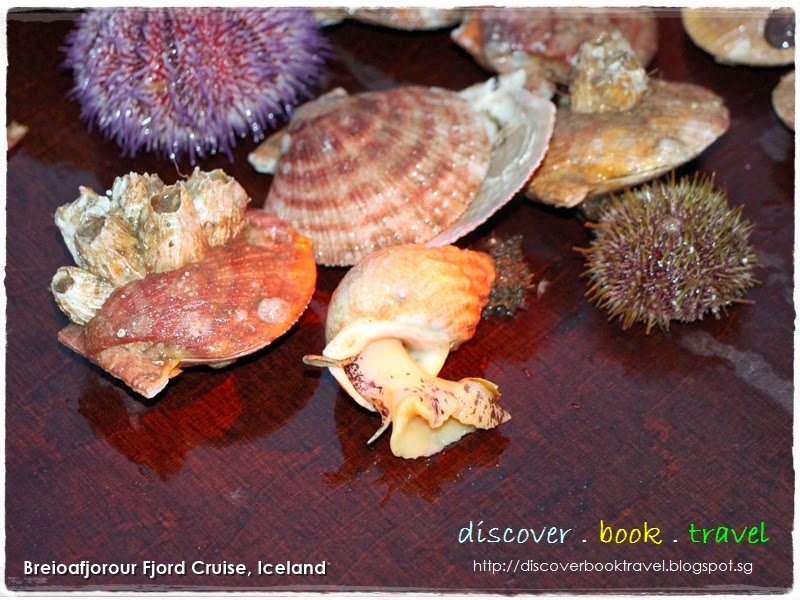 Besides the colourful and spiny sea urchins, the scallops made up the bulk of the dredge. 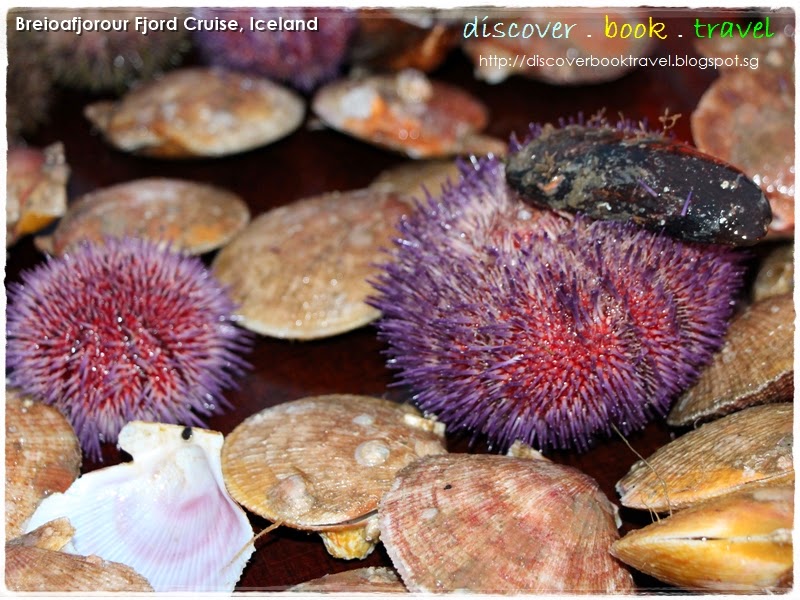 All of us on the cruise readily learnt how to open up the clammed-up shell of the scallop – seemingly the only organism from the dredge which is edible.  But we heard later that the sea urchins were edible as well! 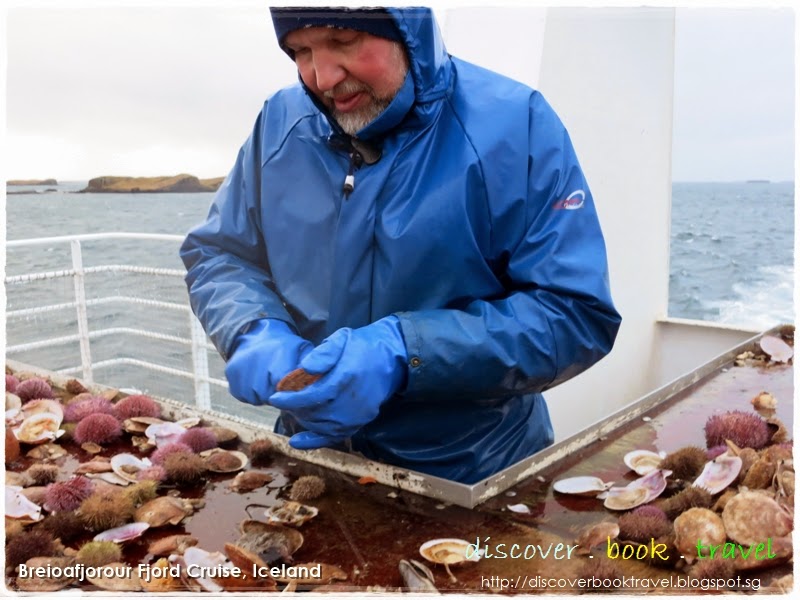 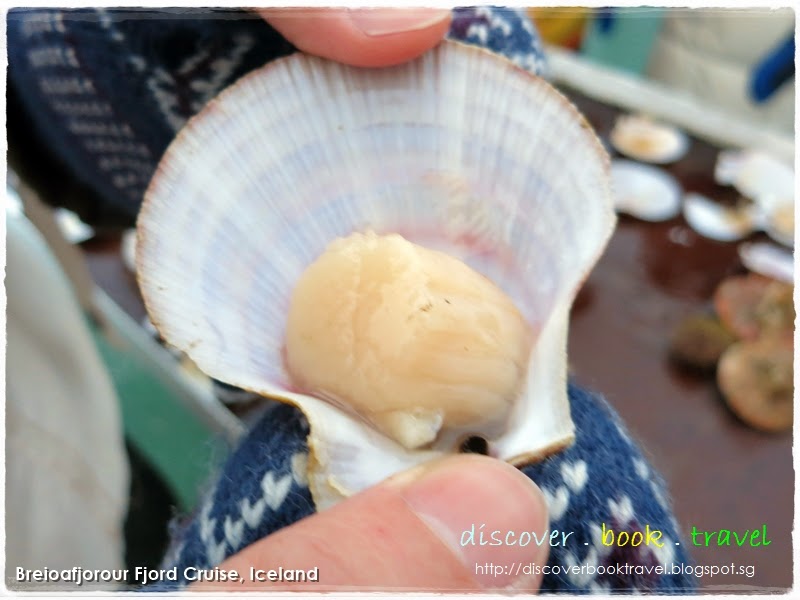 This represents another first for us – eating something straight off the sea of Iceland.  Seafood can’t get any fresher than this.  The scallops tasted very sweet, succulent, with a hint of saltiness of the sea water.  Definitely much better than the frozen scallops we get in Singapore! None of us could stop eating this! 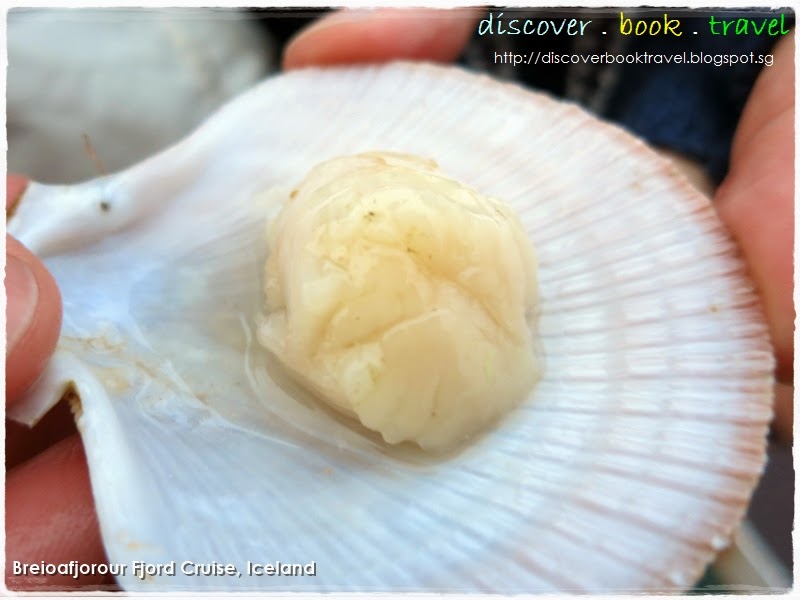 And so, after a very satisfying fresh scallop-tasting and lunch buffet on board the ship, we were on our way to the most terrifying adventure of all – tasting the rotten shark!