Some good things do come for free.  That was what I learnt from visiting the Natural History Museum in South Kensington, London.

Tipped off by a friend who was at London recently, we invested a day to come out from Watford Junction to London city for a day of fun at the museum – all for free, for the museum, like other publicly funded museum in the UK, does not collect entrance fees! 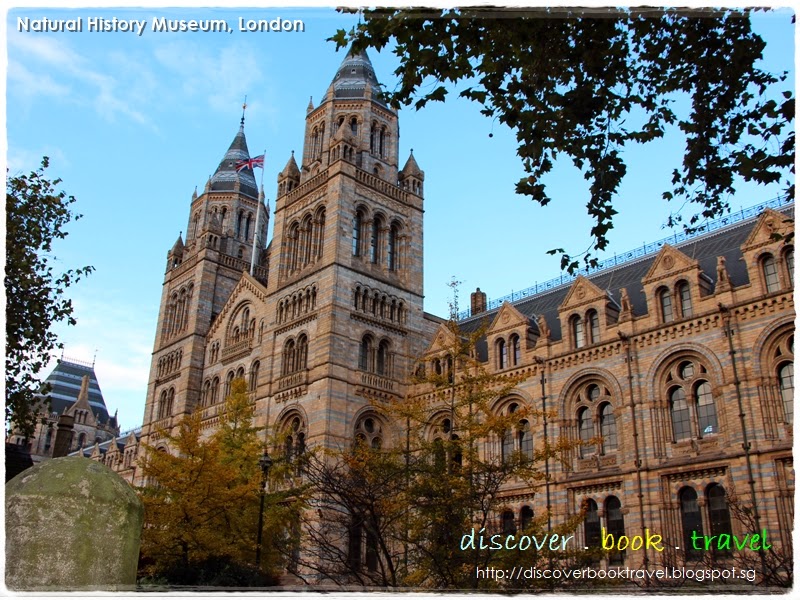 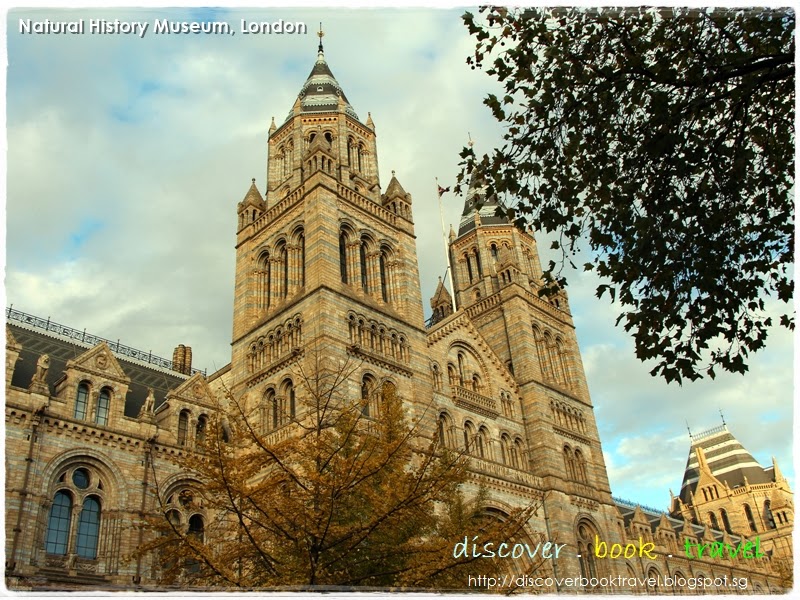 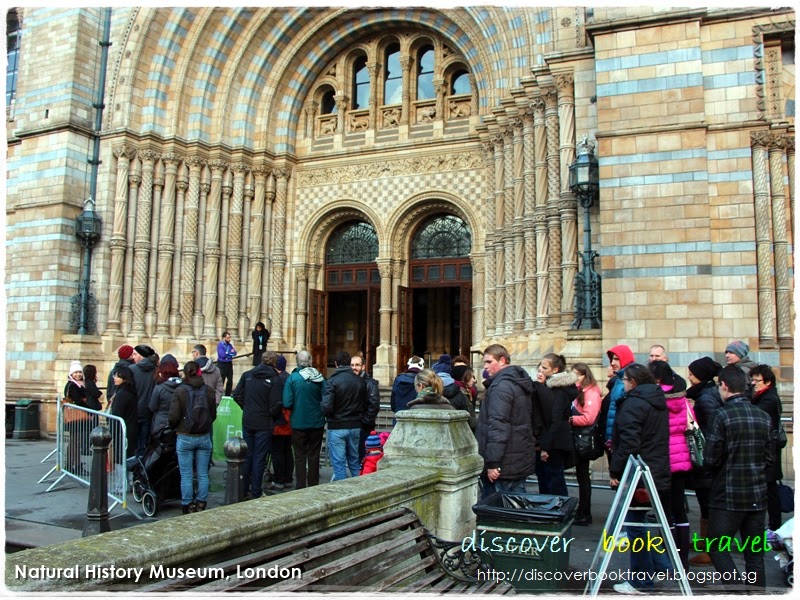 A Day of Zoned Fun

The Natural History Museum is demarcated by 5 different zones, each zone with a theme of its own. 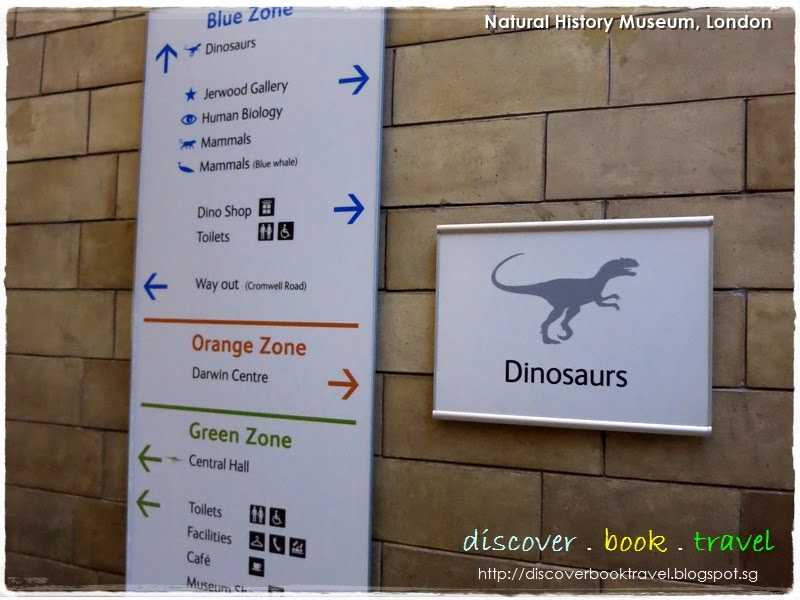 This is where you find yourself when you enter via the Cromwell Road entrance.  Other than the stunning painted ceiling, and interior which reminds me of the Great Hall of Hogwarts, this place also houses the Museum’s most prized assets including a 26 metre long model of a Diplodocus (a species of dinosaurs which lived at the end of the Jurassic period).  Charles Darwin’s (the father of evolution) famous statue sits at the top of the hall’s grand staircase. 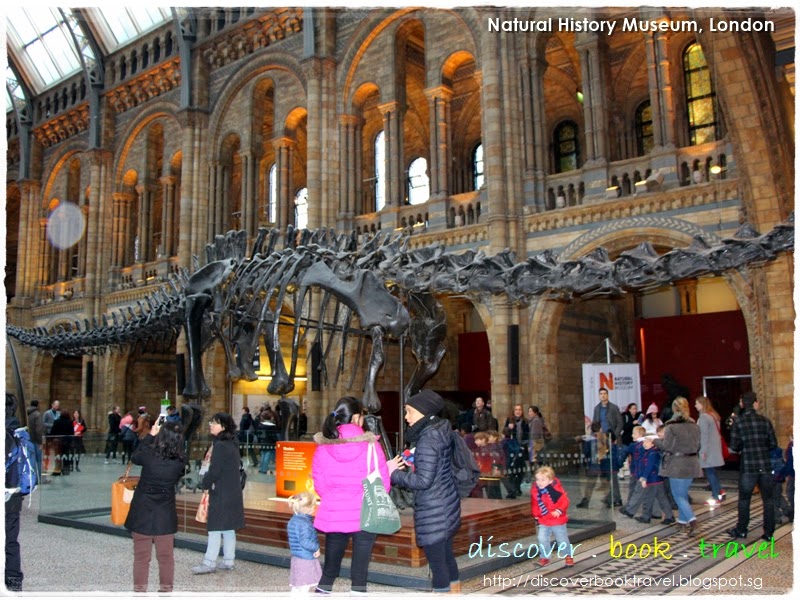 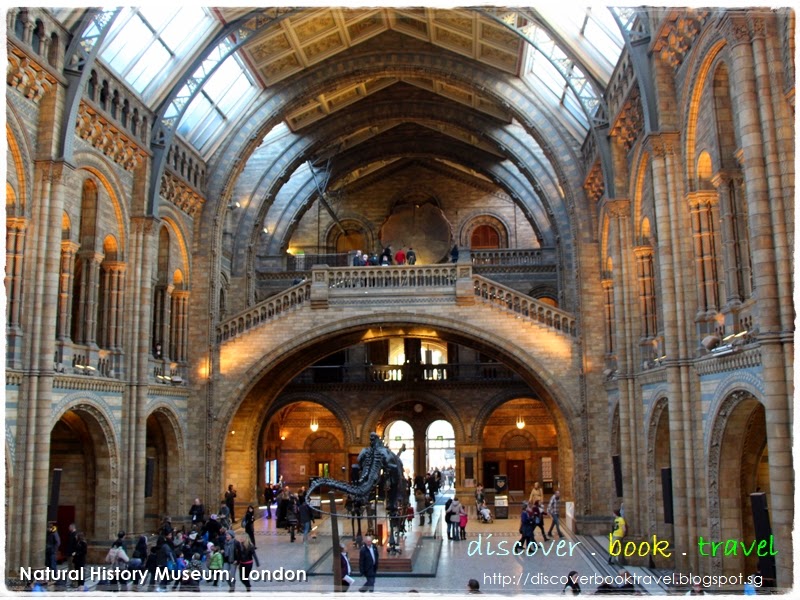 The most fun and interesting zone in my opinion, as this is where you come to experience the age and dynasty of the dinosaurs and come face to face with a moving and howling T-rex.  Head for this zone as soon as you come in because the crowds will thicken over the day, all bound for the dinosaur exhibit. 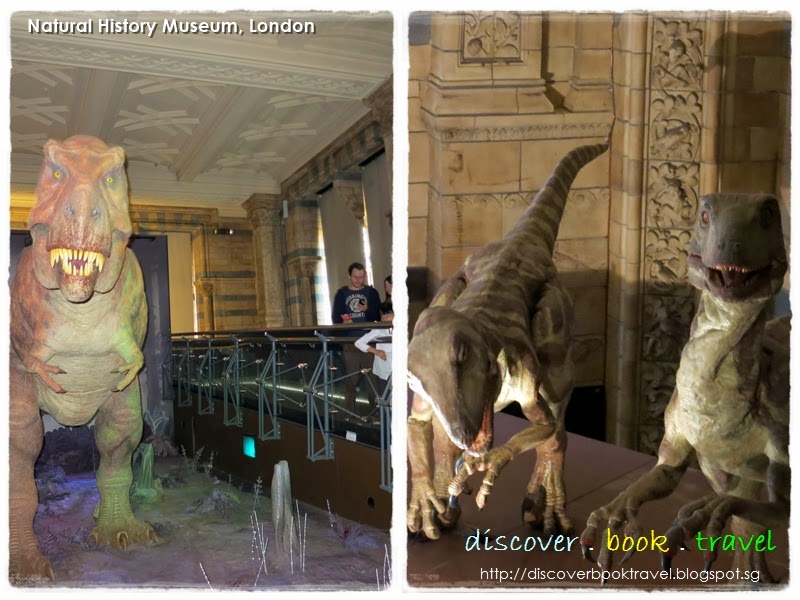 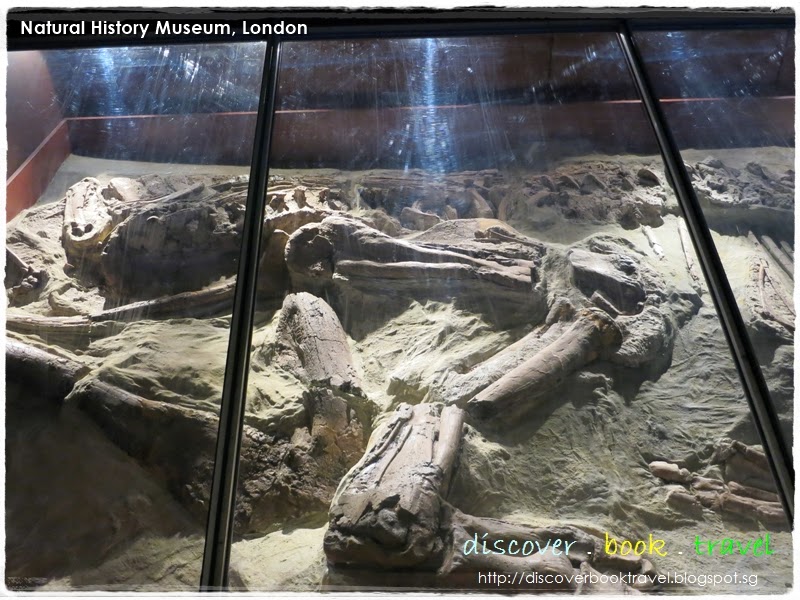 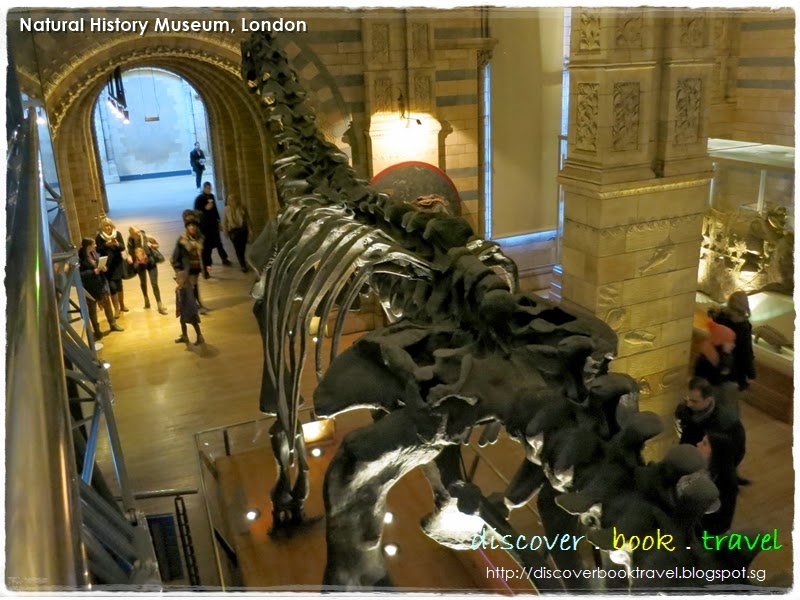 At the Blue Zone, marvel at the Blue Whale, the largest animal in the world.  It is always fascinating to stand beside these life-sized models and see how small and insignificant I am compared to the creatures of the wild. 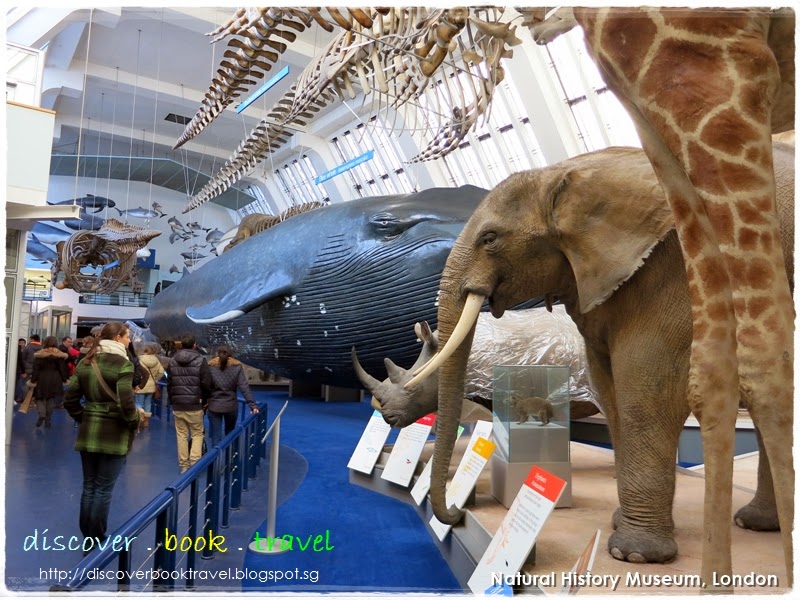 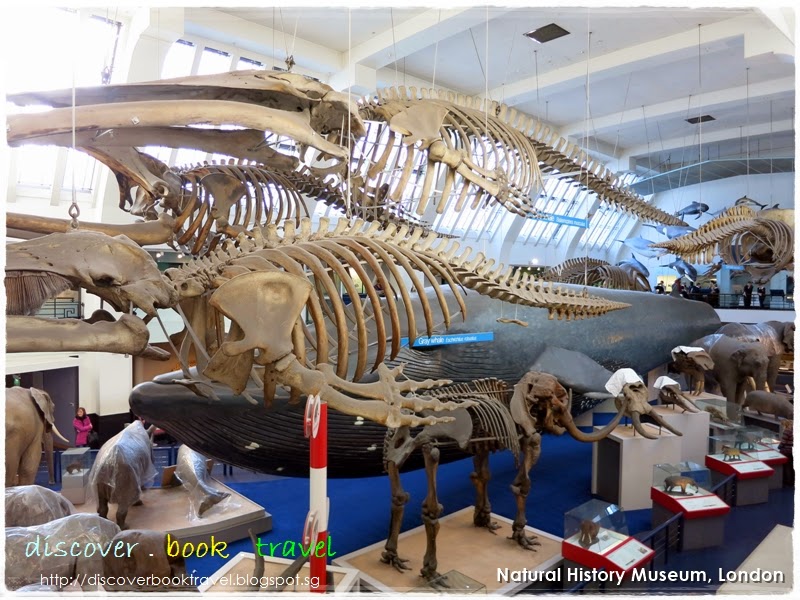 This is also the reason why the Blue Zone is so popular.  Other than the fossils and models of dinosaurs, the mammals section in the Blue Zone has a wonderful exhibition of mammals immortalized through the process of taxidermy, not unlike those that we see at the Wildlife Museum at the Yukon during last year’s trip to Alaska.  It is not easy to catch these wild and ferocious animals up-close and personal, which is why I am glad for the opportunity to do so here. 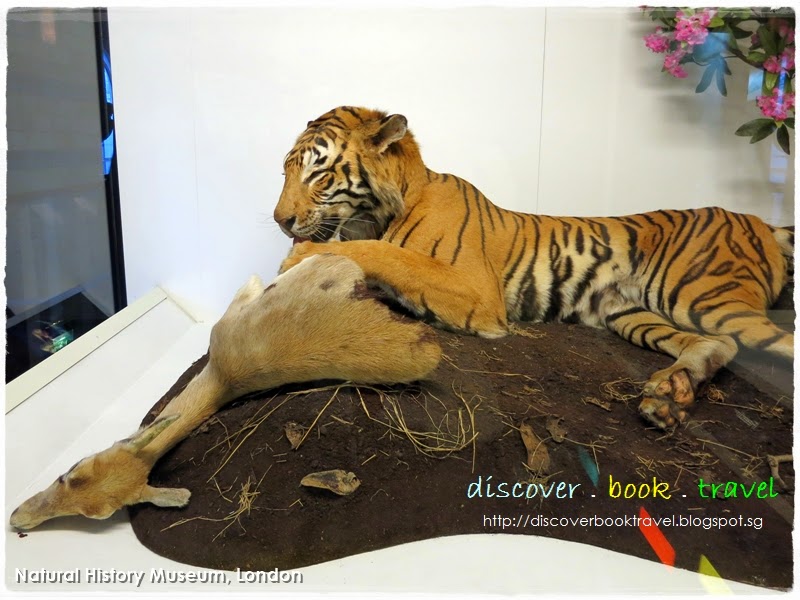 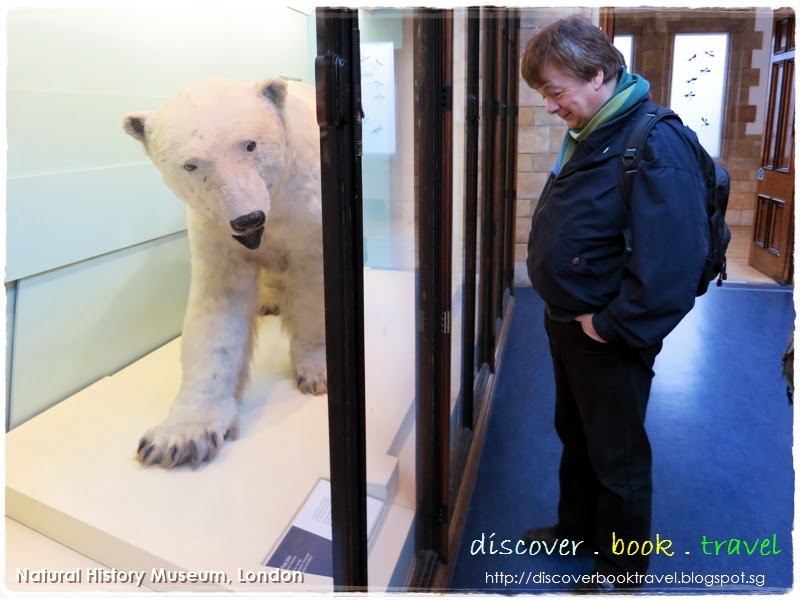 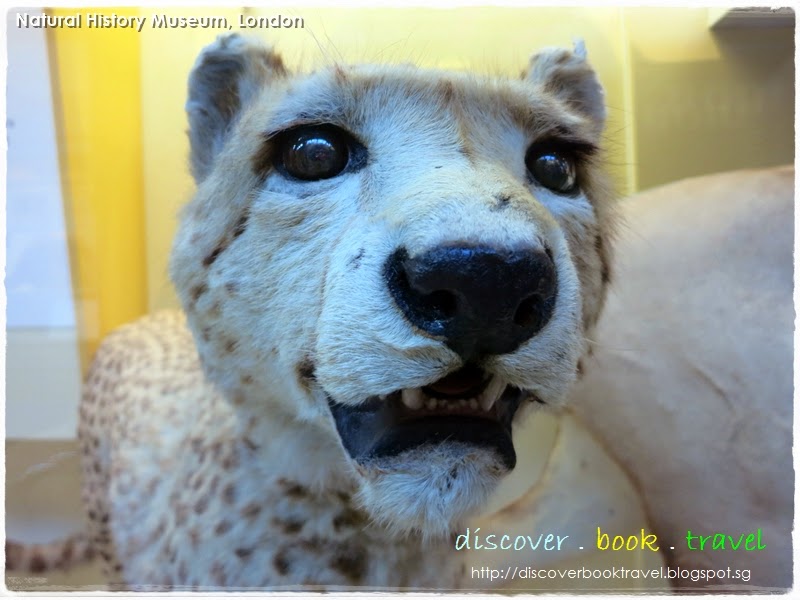 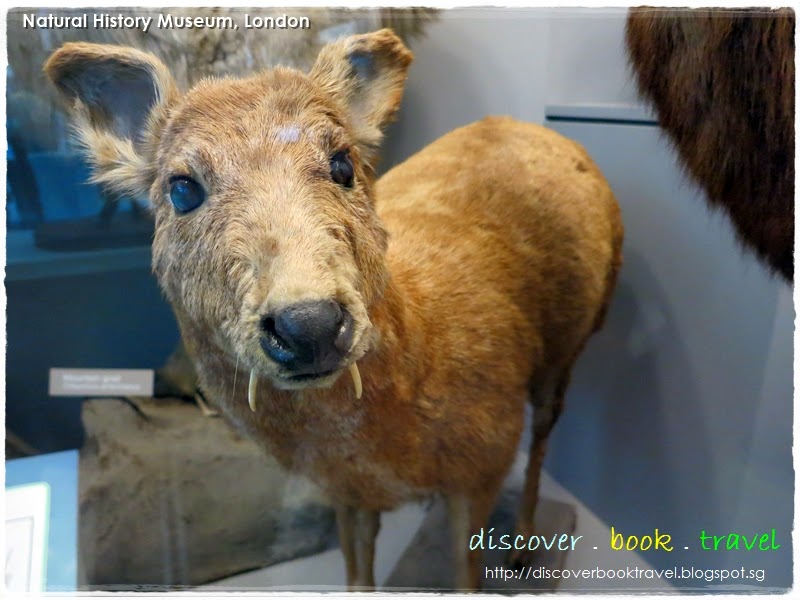 My first sight of the extinct bird – the Dodo. Perhaps the most well-known of all extinct birds, the Dodo became extinct sometime in the 1600s, long before we were born. 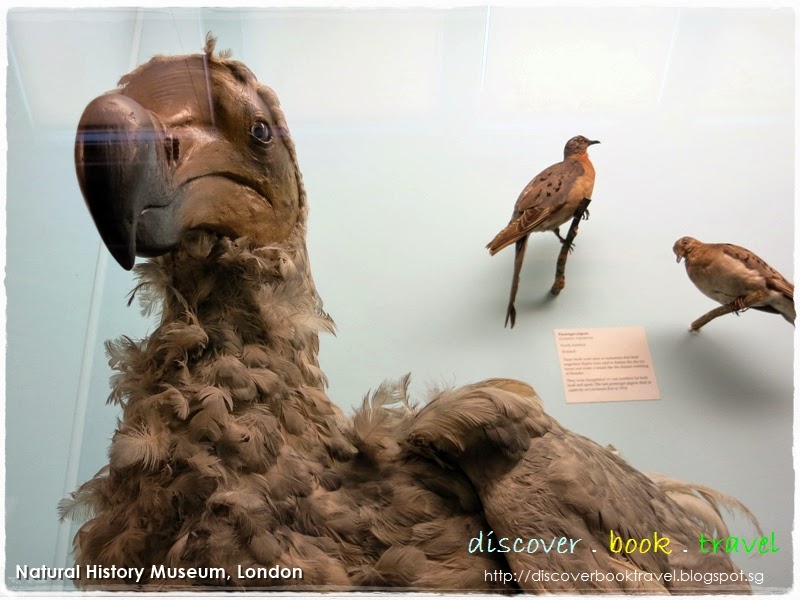 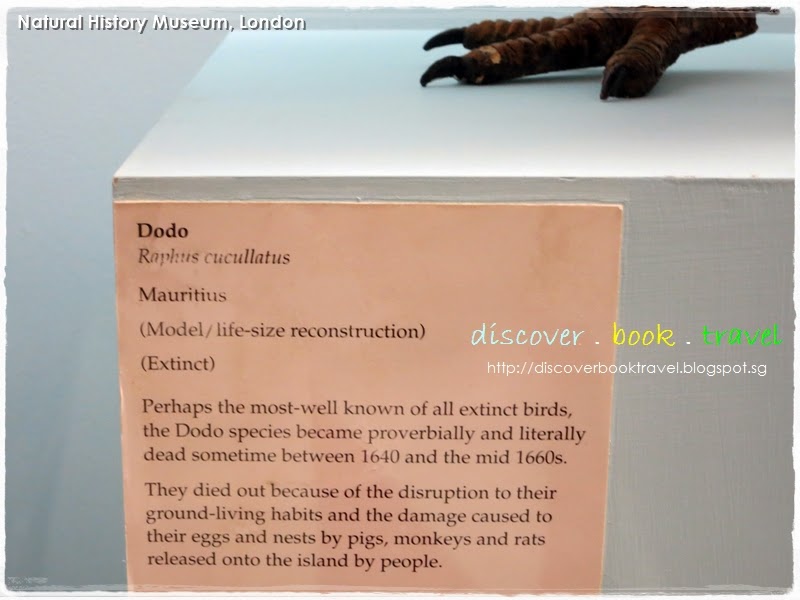 Another of my favourite section in the museum, after the Blue Zone.  The Green Zone is home to a wonderful showcase of birds, creepy crawlies, and marine mammals. Known to contain some of the best examples of marine reptile fossils ever found in Britain, this gallery brings to us the marine lifeforms that populates our oceans the same time that the dinosaurs were walking the earth. 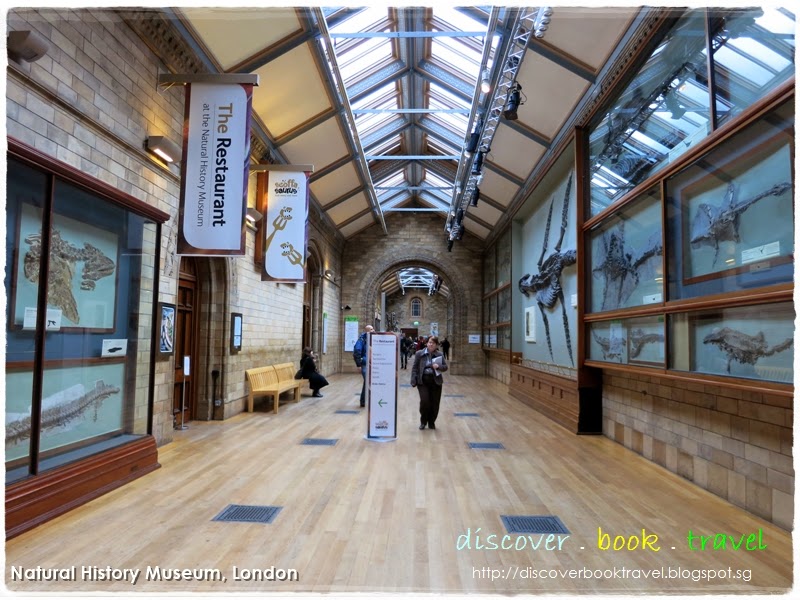 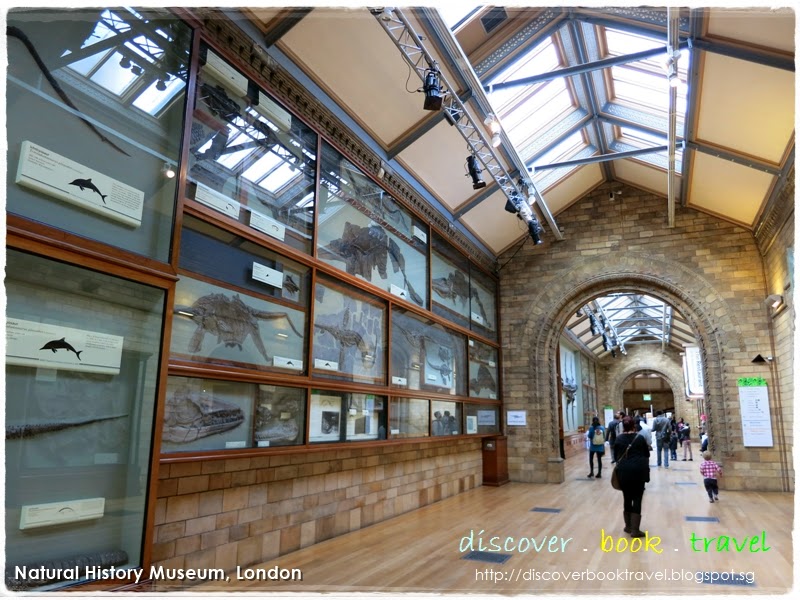 Found at the Green Zone.  A reconstruction of the giant sloth thought to populate Earth many millions of years ago. 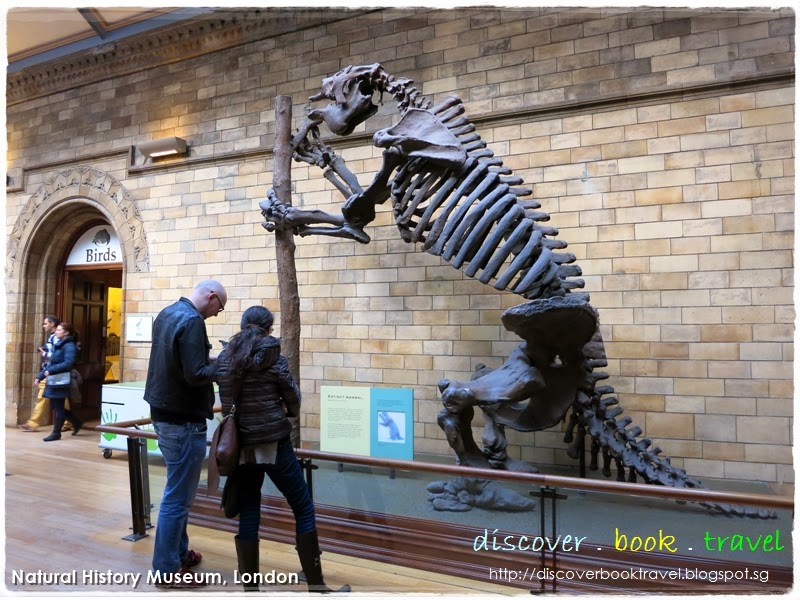 The Giant sequoia is another jem of the Green Zone.  Sequoias are amongst the largest living things on Earth.  At the age of 1335 years (imagine that!), this giant sequoia was felled in 1891 and a cross section of its truck is now on display at the museum. 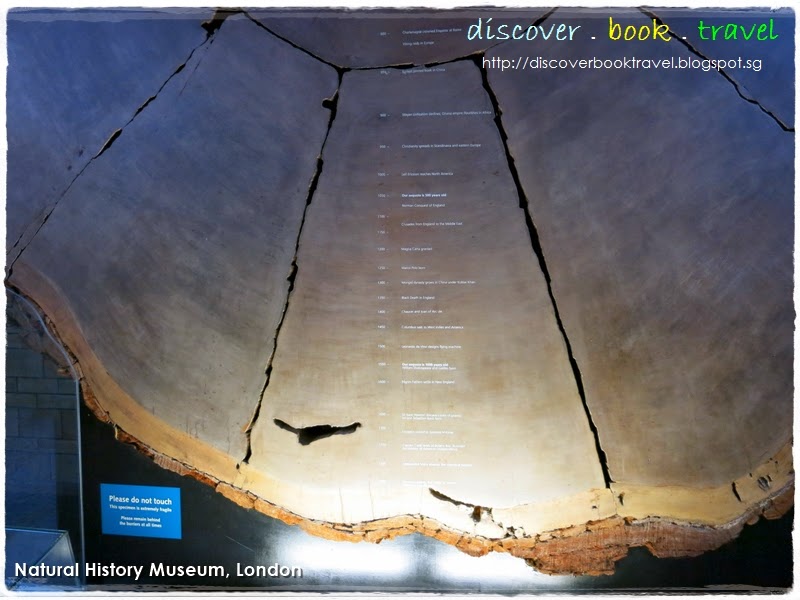 It won’t be difficult to imagine the size of the giant sequoia tree.  Just look at the size of its girth! 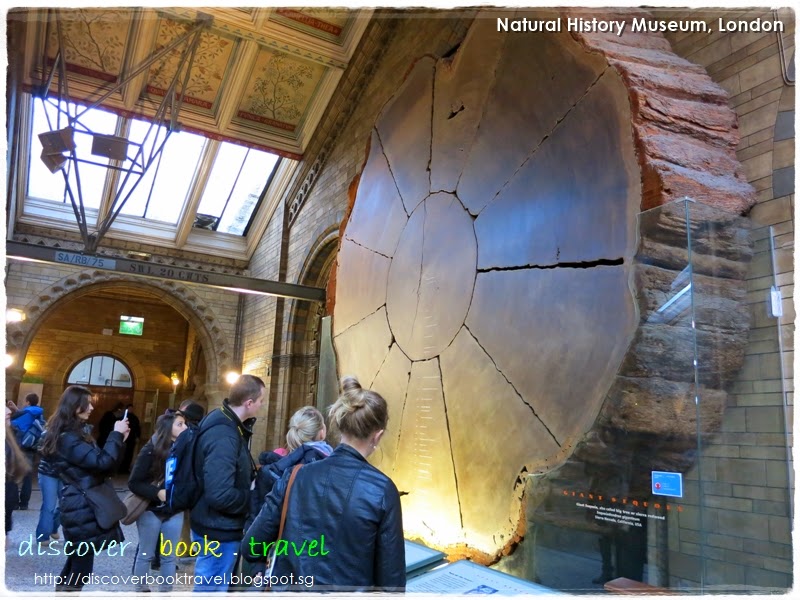 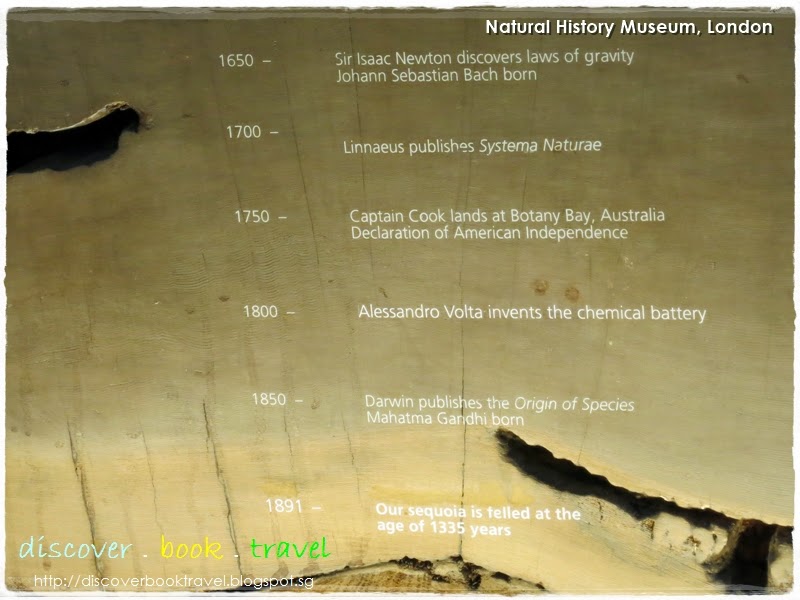 At the Minerals Gallery, learn how minerals are formed and marvel at the extensive collection of more than 12,000 gems and specimens. The Minerals Gallery shows off raw, cut and polished gemstones. Wish I could get one of those large jems for myself though! 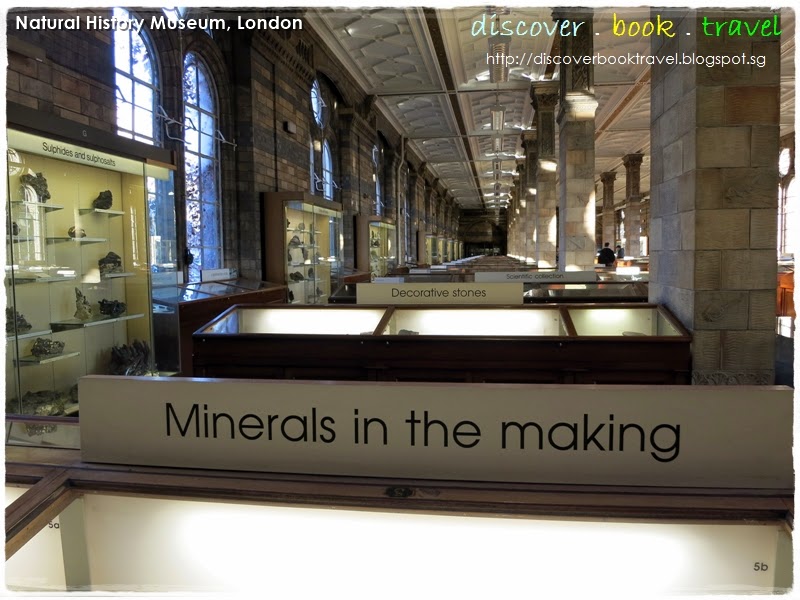 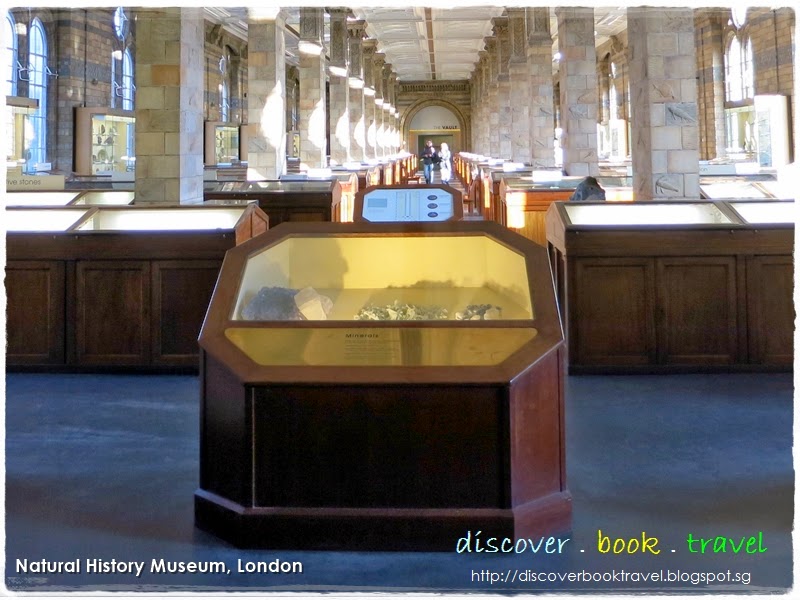 Having one of the most dramatic entrances to a zone, the Red Zone tells of our ever-changing planet. Discover the natural forces that shape it, the treasures we take from it, the effect we have on it and its place in the universe and Earth’s beginnings, formation, volcanoes and earthquakes.

With dramatic film footage, impressive specimens and objects, interactive games, and a earthquake simulator, it is a must-see gallery for visitors. 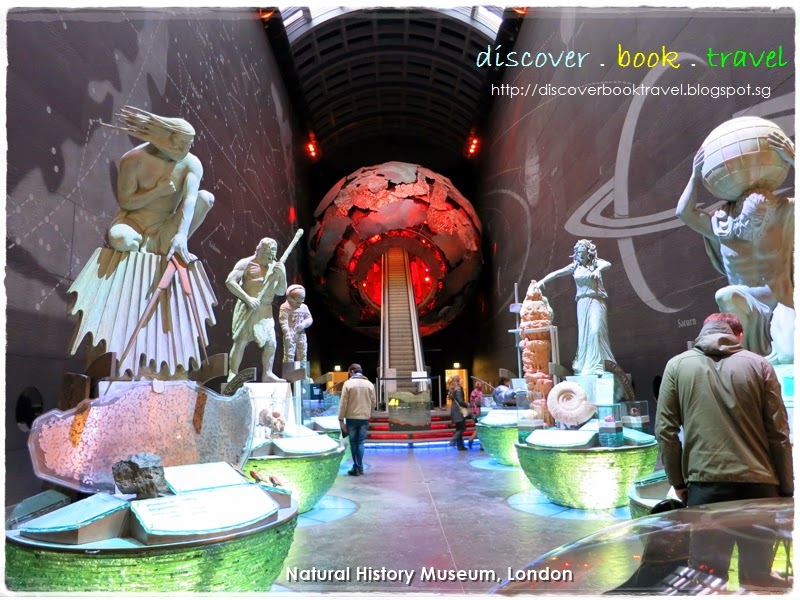 The Earth Lab at the Red Zone is the place to explore the exciting and varied world of British geology. Containing more than 2000 geological and fossil specimens, the gallery area is packed with fascinating fossils, shiny minerals and rocks. 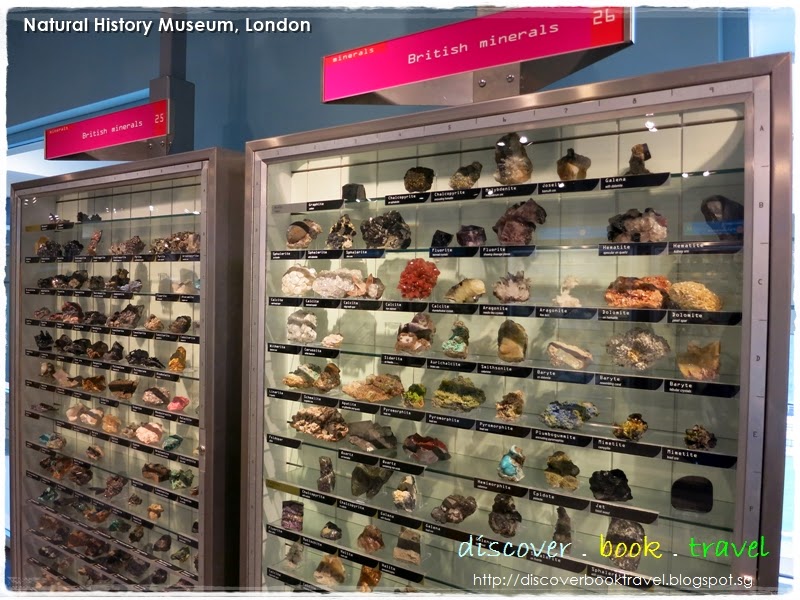 Ok, folks, ignore this zone if you really want to leave by now.  The Orange Zone is populated mainly by the Darwin Centre and is designed as a home for the centre’s millions of preserved specimens as well as work spaces for the museum’s staff.

How to get to the Natural History Museum, London

Here’s a map retrieved from the Natural History Museum website for your reference. 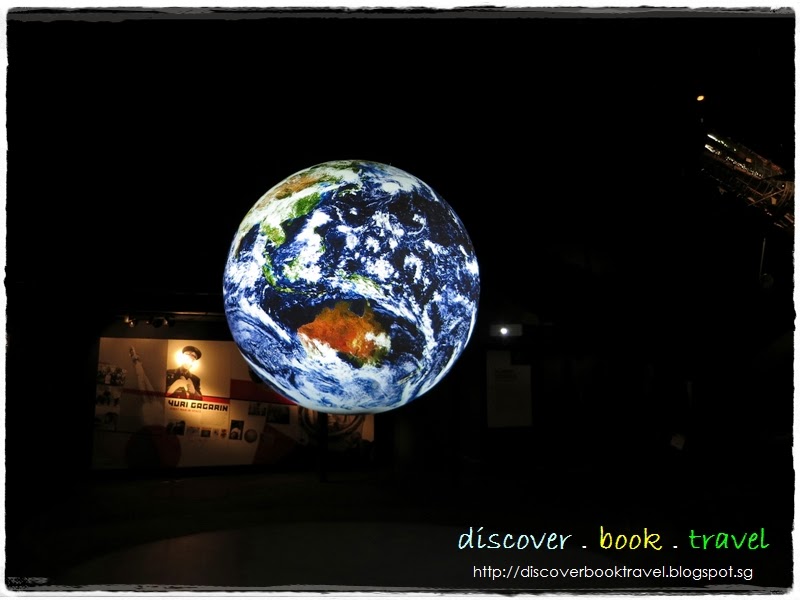 Join us next as we marvel at Europe’s most powerful hotspring.

Let’s Get on Board the Caribbean Princess! (updated 2019)