I thought it would be fun to explore a lava vein.  I mean I had always wanted to be inside a volcano, or at least part of it, and other than a volcano tour which operates only in summer, this was the closest that I could get to it.  Formed by horizontal movement of lava which later cools, these lava caves becomes  tube-like and sometimes, the flow of the ancient lava is still visible in many places within the cave. 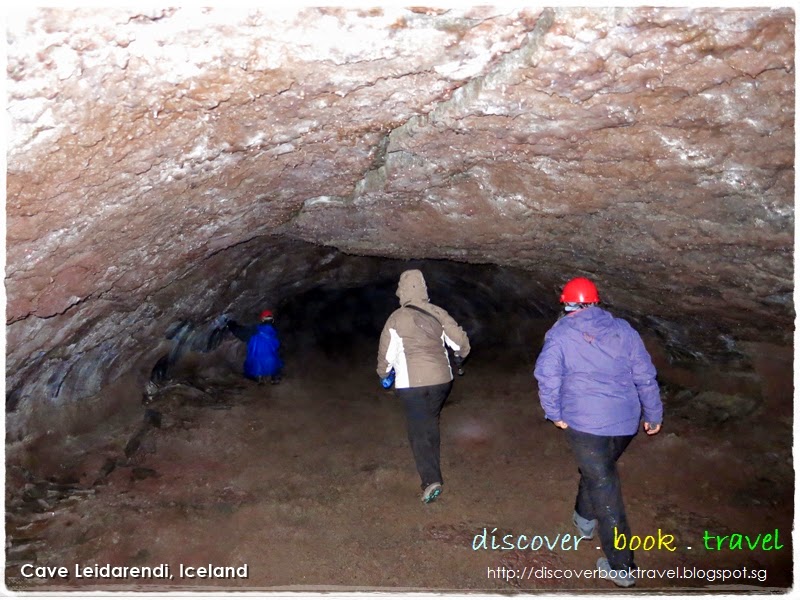 And so, after we finished with a most hectic 8 days 7 nights tour with Guomundur Jonasson (GJ) Travel where we saw a huge amount of volcanos, glaciers and waterfalls,  Tommy and I had boldly signed up for more adventure with Extreme Iceland. (To be honest, Tommy was bullied into signing up with me to keep me company).

Most of those who had journeyed with us during the past 8 days were surprised, because the majority of us were dead tired after a most grueling schedule.  Many of them were returning home, while some others were going to enjoy a leisurely day at Reykjavik.   But nope, I pipped. We were going to complete our adventure in Iceland by (literally) visiting its interior.

I must say, it was fun until 5 minutes into the adventure.  At first, the heavy rain that poured down on us did nothing to dampen our spirits as we walked bravely amid moss-covered rocks and boulders to our destination – the Leidarendi Cave. 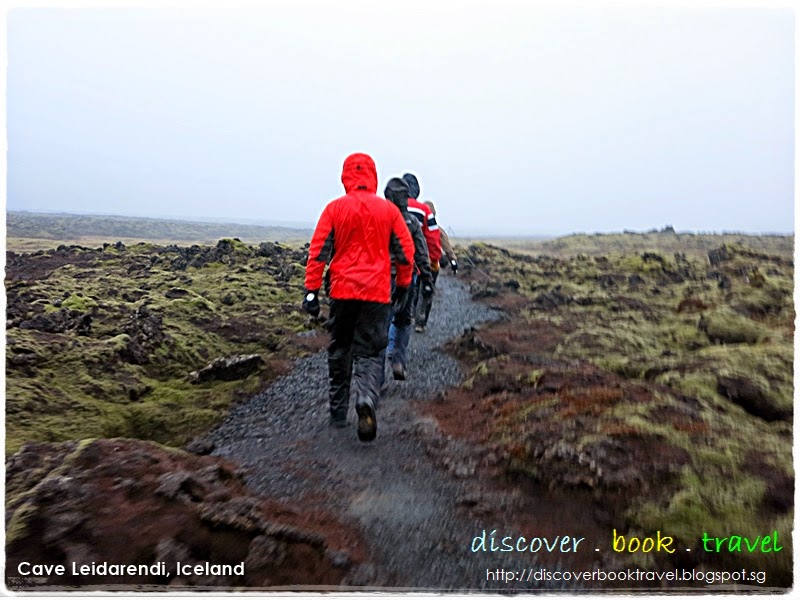 But not before we were given a safety briefing in the comfort of our vehicle and issued safety equipment. This helmet eventually saved me from a cracked skull so many times that I had lost count. 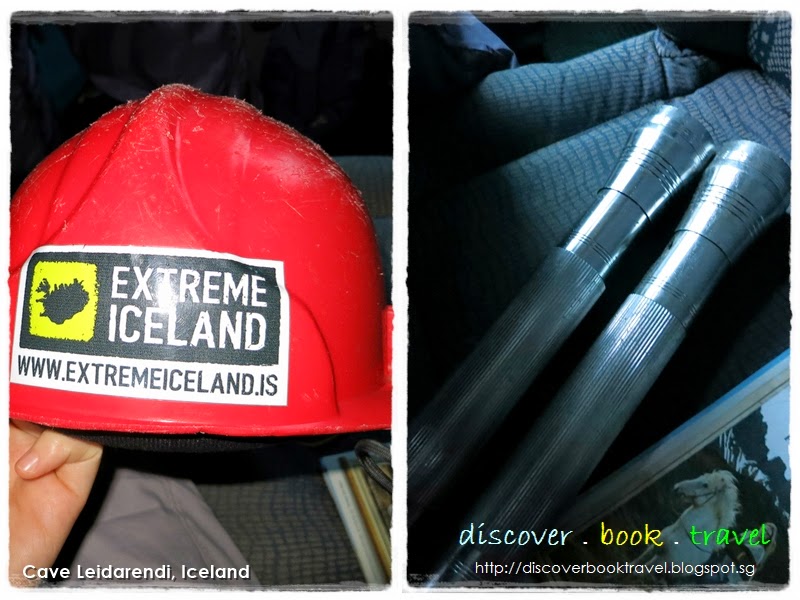 The entrance to the lava cave by itself was already stunningly beautiful and we took brief moments to take in the surroundings before climbing down into the cave in file. 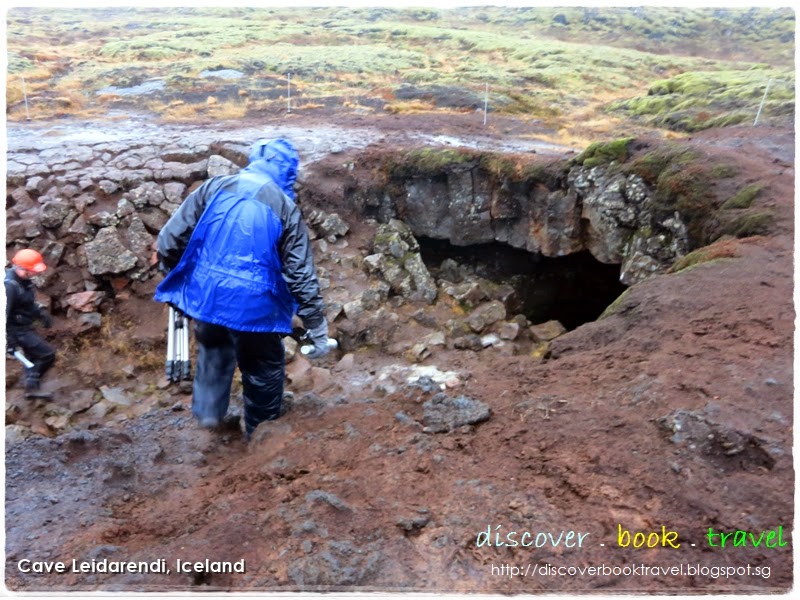 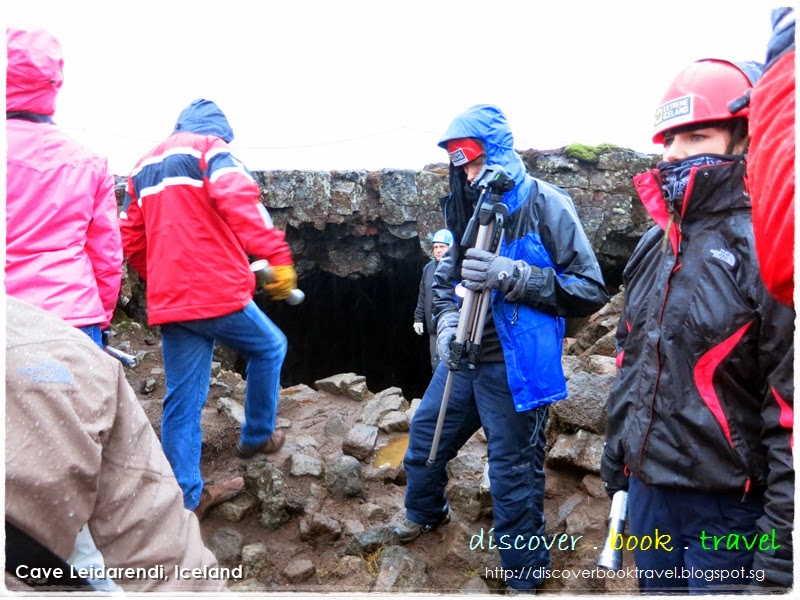 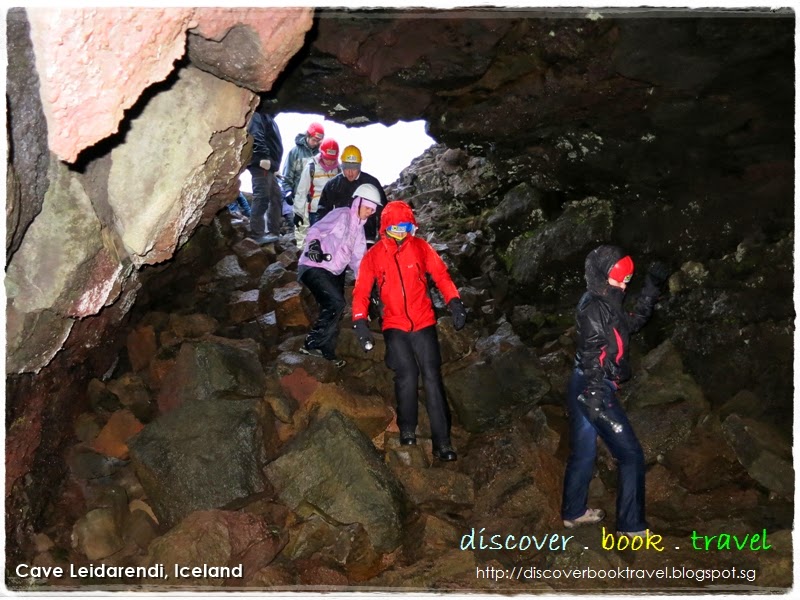 And so, it was that 5 minutes into the caving adventure, my excitement started to wane.  I mean, I was still really excited to be in a cave where lava used to flow.  But then the walk started to get quite uneven (and although I know I am beginning to sound really preachy here, I have to yet again emphasise how important it is to wear a good pair of hiking boots, and the passageway started to get really dark and narrow that most of the time, we had to walk in single file and keep our backs bent. 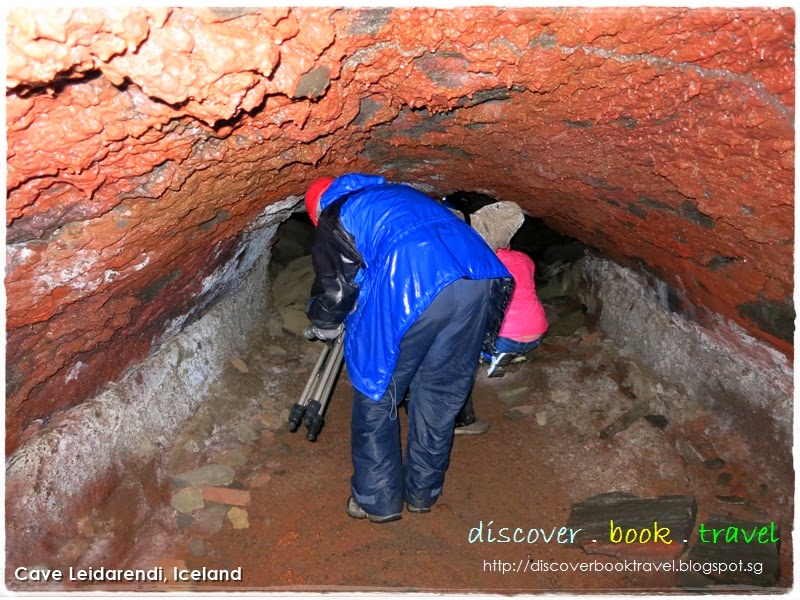 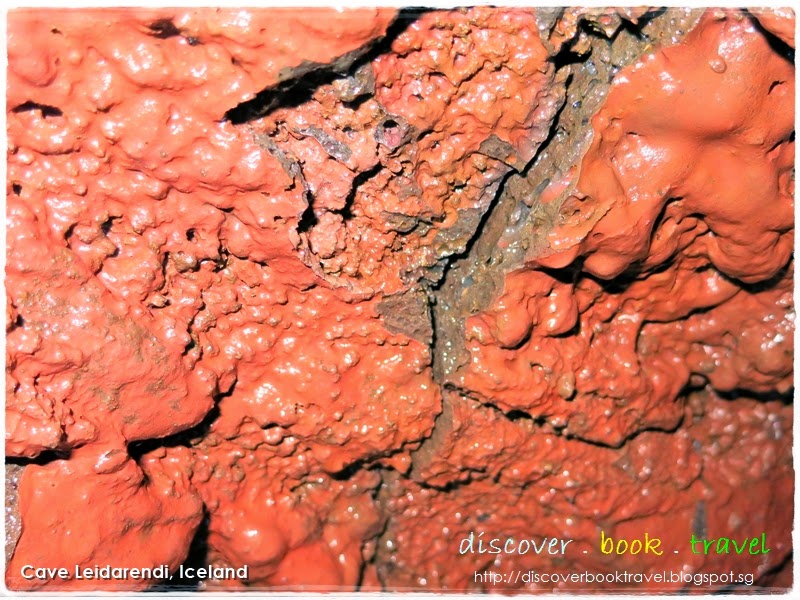 Total Darkness as we start entering the cave. 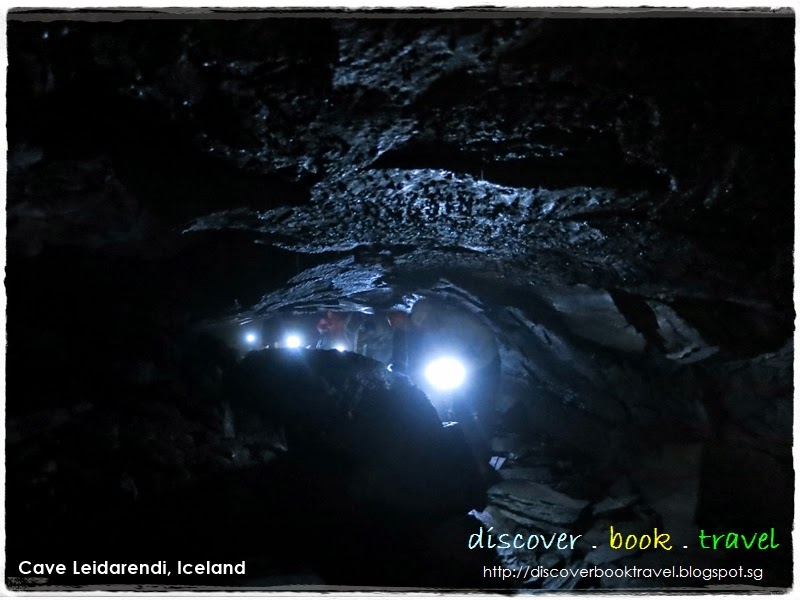 At times, the cave widened out into a massive chamber, giving us some breathing space and a chance to examine the walls and ceilings more closely. 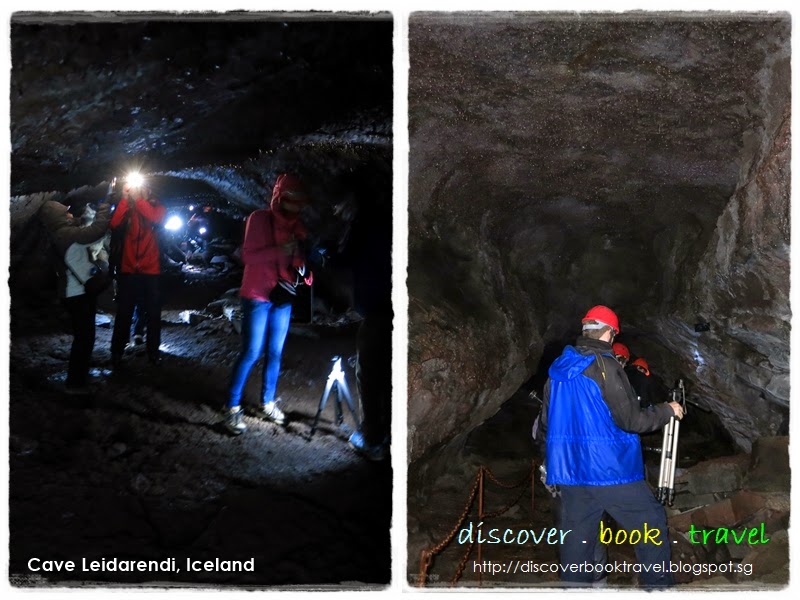 Our guide, a man of few words tried his very best to be introduce us the various stalagmites and stalactites in the cave.  But as with the Jenolan Caves at the Blue Mountains in Sydney and the Surprise Cave at Halong Bay in Hanoi, a fair amount of imagination and creativity is needed to appreciate these natural formations. 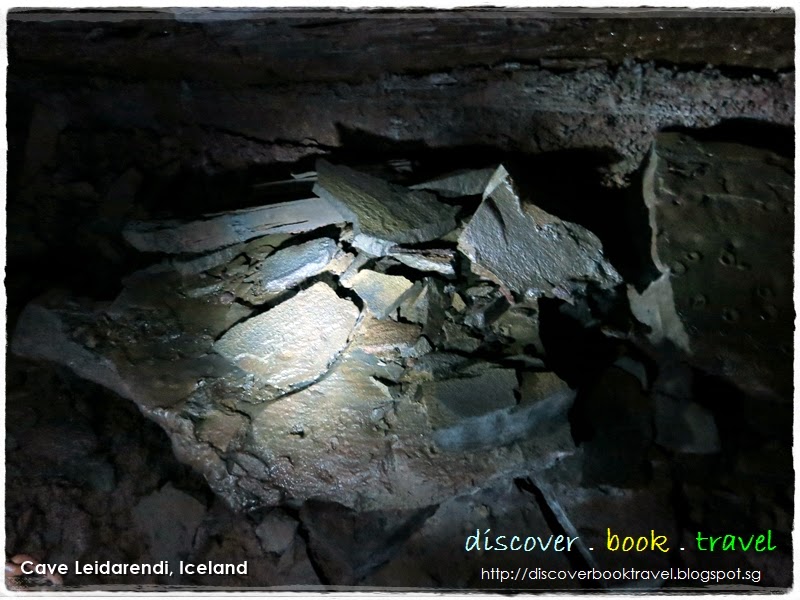 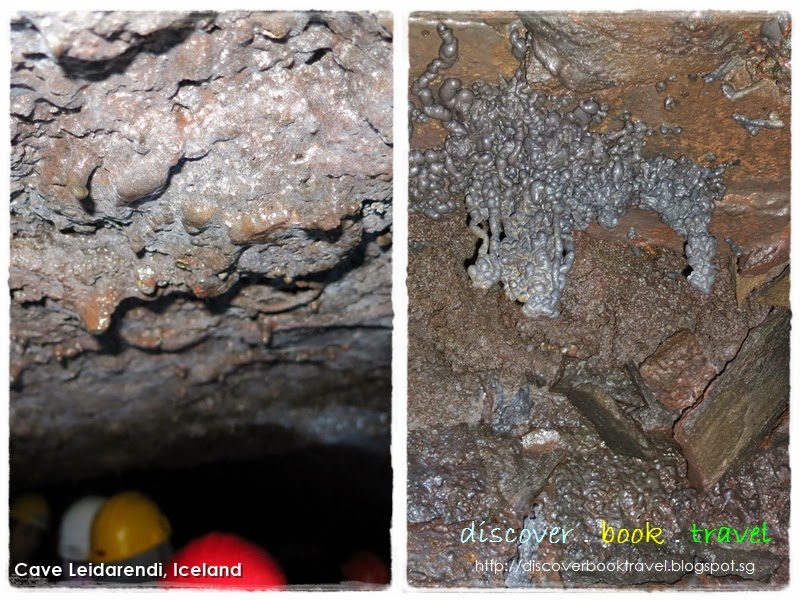 But unlike these caves, there were no man-made handrails or steps installed in Leidarendi, and I applaud this decision to preserve the attraction in its natural state.  A certain amount of fencing was however put up to protect some of the delicate rock formations on the ground, unless we tourists unwittingly step on it. 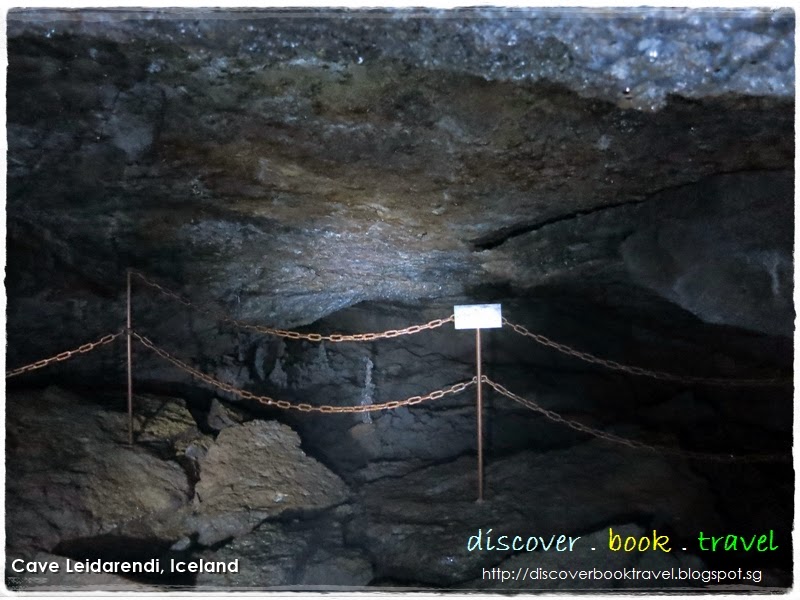 This natural rock structure formed on the low ceiling of the cave is called the ‘Crown’.  Each of us had fun trying on the crown and pretending to be the king of the nether world. 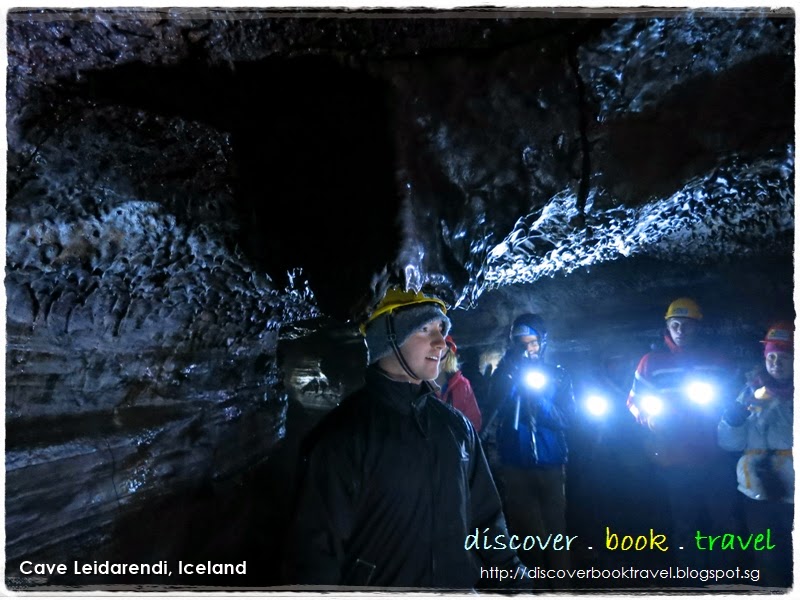 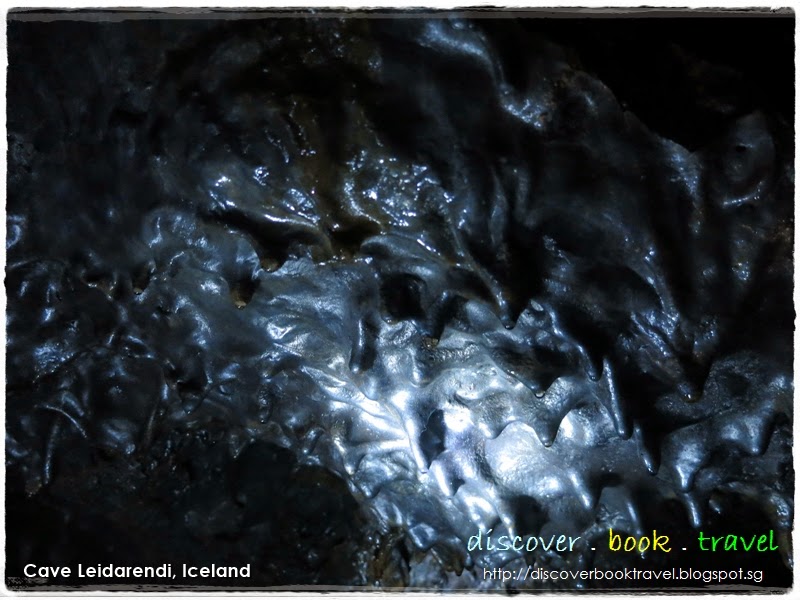 The End of the Journey

Cave Leidarendi is about 900 metres long and was mapped out in as early as 1992. 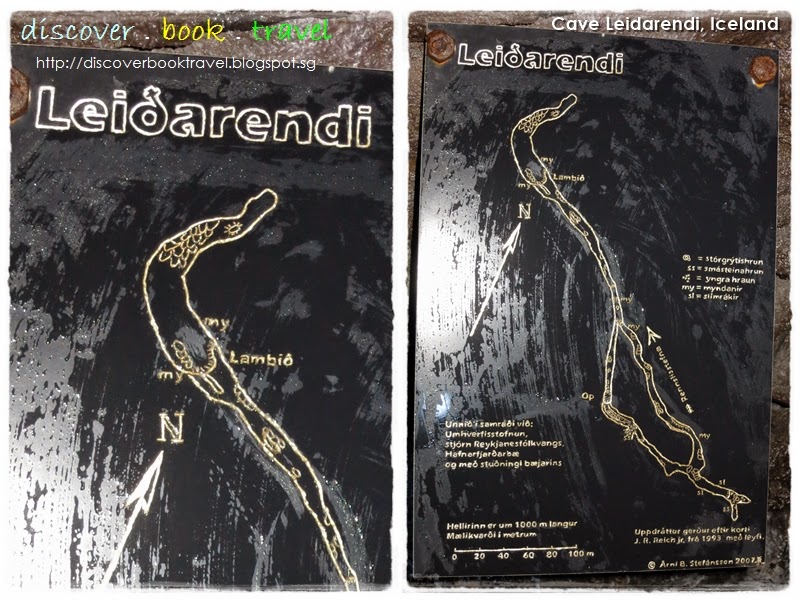 Leidarendi literally translates to ‘End of the Journey’.  It was named after a sheep whose bones were found at the far end of the cave.  The sheep had most likely fell into the cave and could not find its way out, eventually becoming fossilised in the cave.

The fossils of the sheep that gave Cave Leidarendi its name. 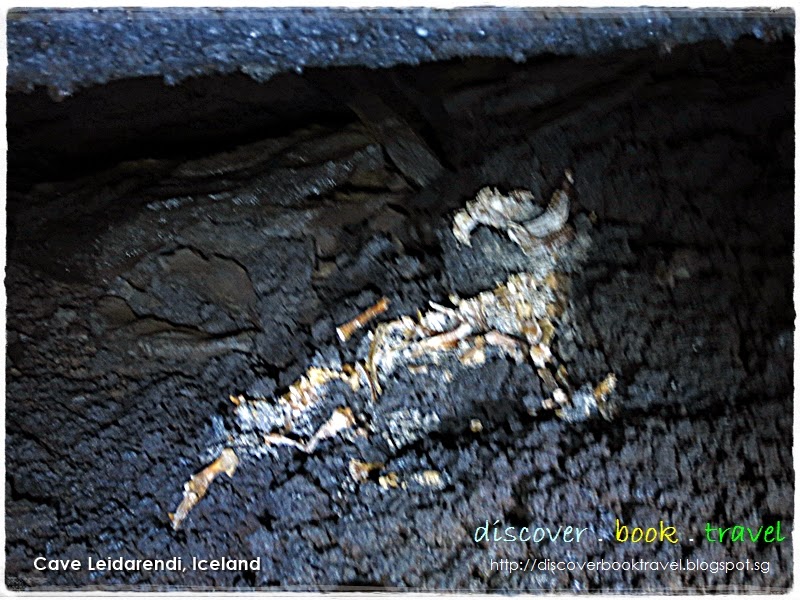 Down on all Fours

A choice was given to us on the return trip back to ground –  either take a longer but easier route, or take a short-cut through a more difficult part where we had to crawl through low ceilings.  We voted unanimously for the latter, I presumed most of us at this point became a little miserable and wanted to be back at surface level asap.

And so here I am, a little Asian girl of petite build, finding it immensely difficult to crawl through the low ceiling (remember I told you that helmet saved my life a couple of times?). 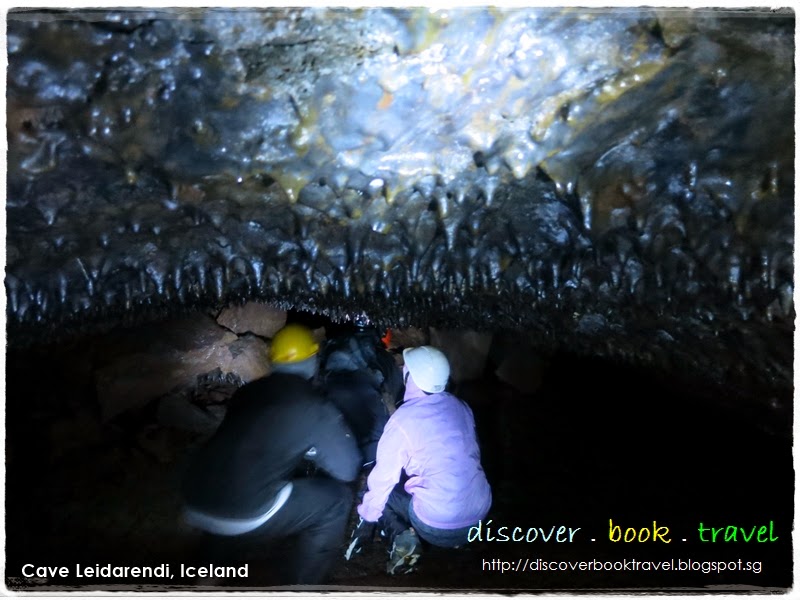 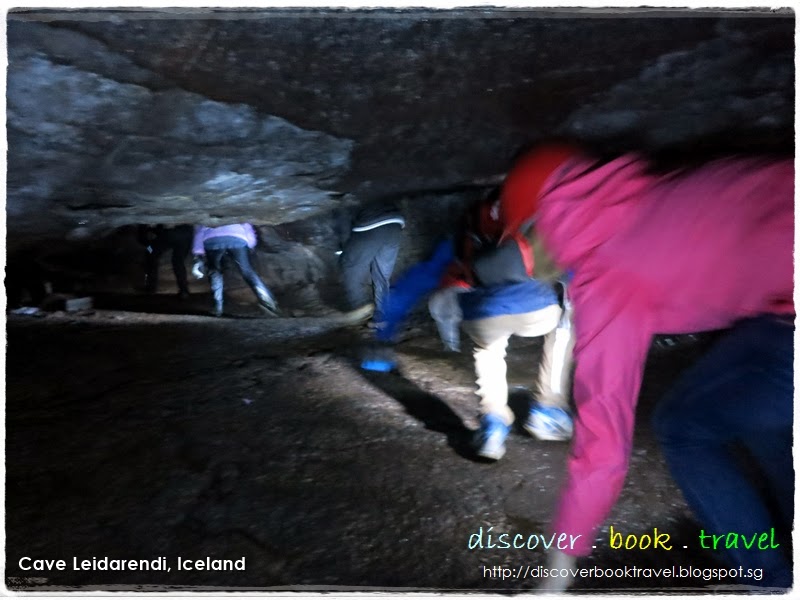 I wasn’t exaggerating when I said we had to crawl on all fours.  But honestly, this picture brought back a smile on my face when I looked at it.  Did I really subject myself to that impossible task?!  I remember that this was the part where I fervently wished that we had head lamps attached to our helmets instead of having a handheld, because I really needed the full use of all four limbs to get myself out of this rut. 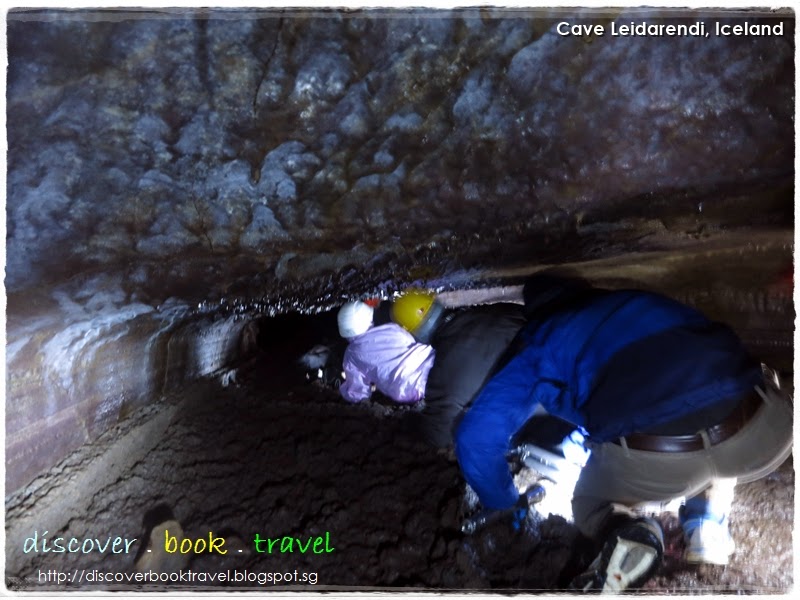 The Light at the End of the Tunnel

I can’t tell you how relived we were to see the end of this adventure – not because we were claustrophobic, but because this ‘walk’ was proving to be really physically challenging.  We found ourselves panting and catching our breaths by the time we hauled ourselves out of the hole in the ground, as if we had just ran a marathon. 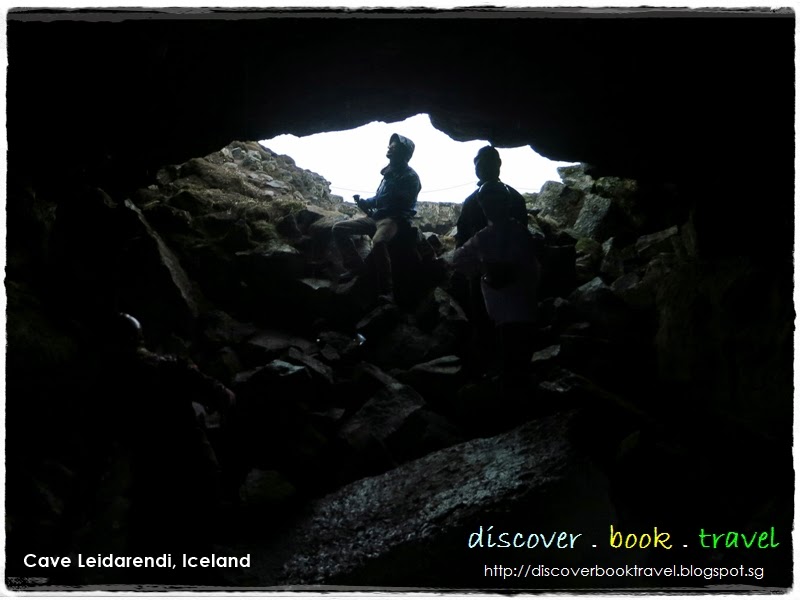 To this day, we still could not explain why it was so.  Maybe it was the crawl, maybe it was the unsteady ground, maybe it was the hassle of having to climb over boulders sometimes. But the only thought that dominated my mind back then was one of immense relief, and a bit of a regret that I had gotten Tommy into this. 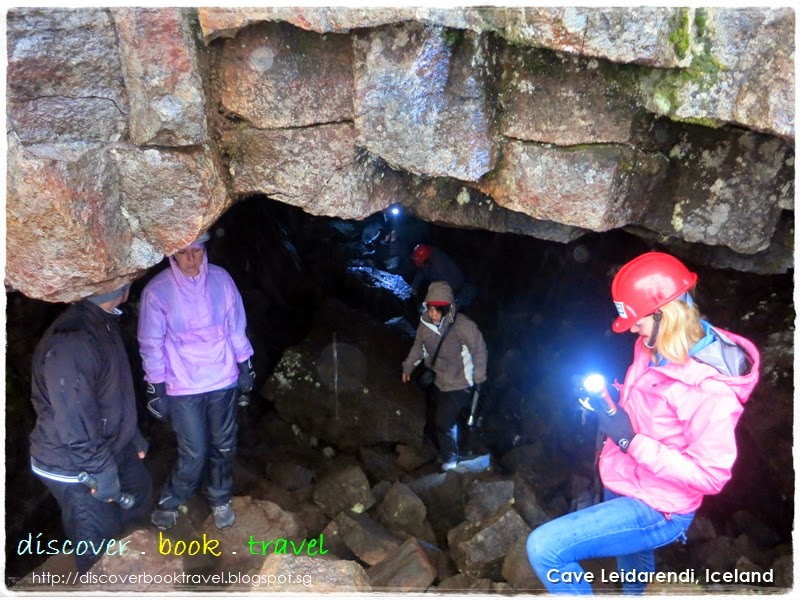 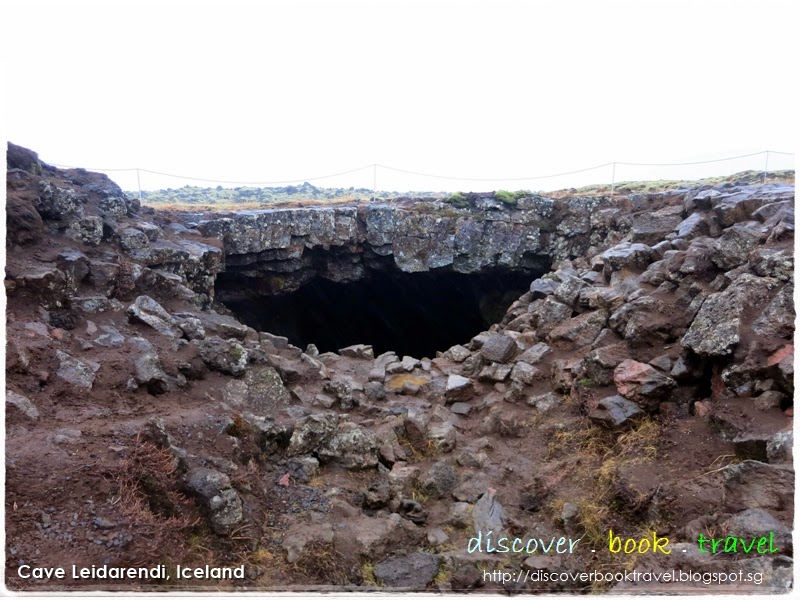 But you see, months after the adventure ended, I think I have quite forgotten how challenging this tour was.  So if you ask me again now, I think I am game to do this again.

Join us next as we visit the Hallgrimskirkja church.