Gulfoss, together with Þingvellir and the geysers of Haukadalur (also known as Strokkur Geysir), forms the Golden Circle, the most popular day tour for tourists in Reykjavik, Iceland.

The Golden Circle tour takes half a day from Reykjavik and should not be missed, even for tourists who have little time to spare. 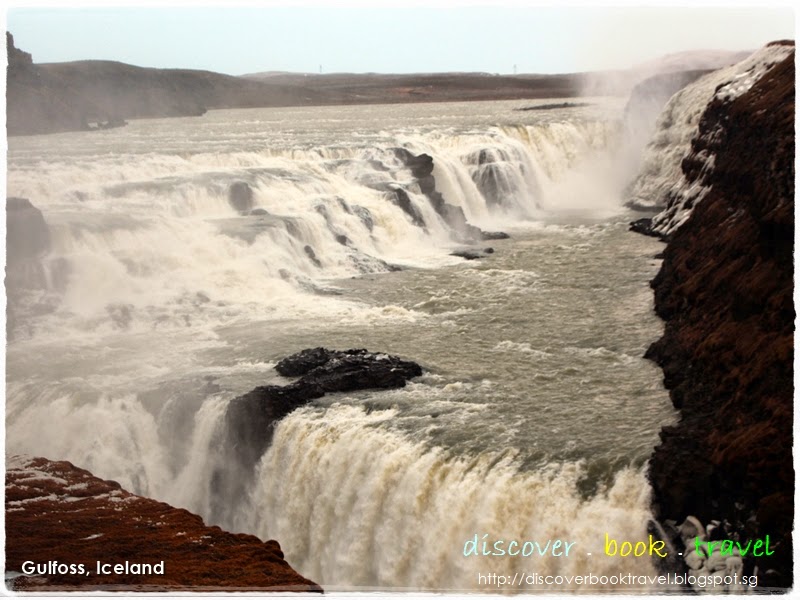 On Day 3 of our 8D7N Northern Lights Exploration package tour by Guomundur Jonasson (GJ) Travel, we kicked off our day with the much anticipated Golden Circle Tour, our third and last stop (after Þingvellir National Park, and the geysers of Haukadalur of this tour being Gulfoss, also known as Iceland’s Golden Waterfall. 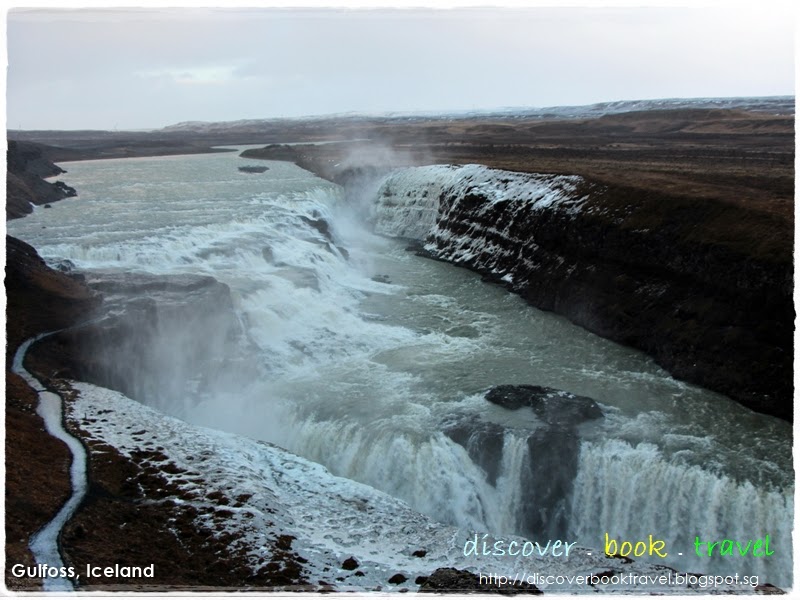 Visitors to Gulfoss can walk to the edge to view the gushing waters, or as a friend said, stand so close that you feel you are standing at the edge of the earth and feel the mist of the glacier spray on your face. Unfortunately for us, on this November day that we visited the Gulfoss, the trail was closed due to bad weather and walking close to the waterfall was unsafe. 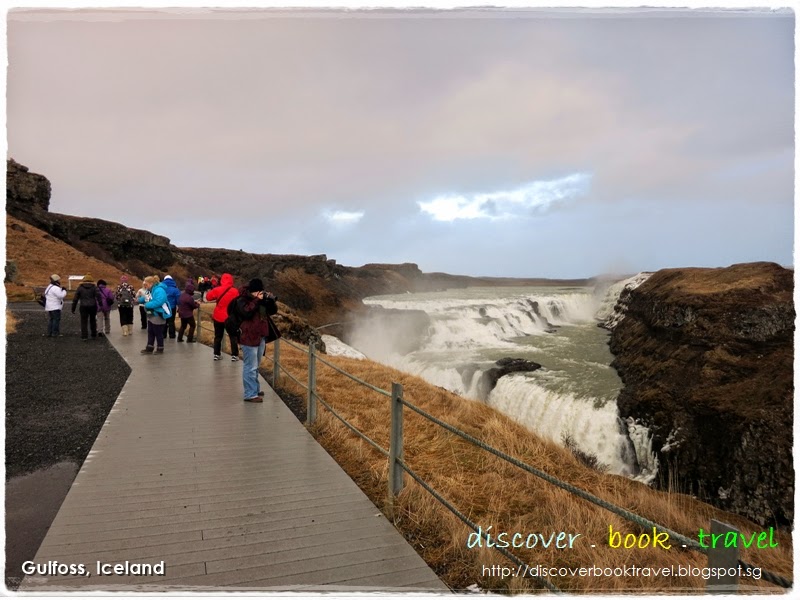 Gulfoss is actually made up of 2 waterfalls (or steps), one 11 metres high and the other 22m.  From the viewing platform, it seems as if the water cascades and disappears into the earth, but there is actually a 32-metres deep and 2.5km-wide canyon beneath that captures this large basin of water.  It is this tiered-structure that makes Gulfoss so beautiful and unique. 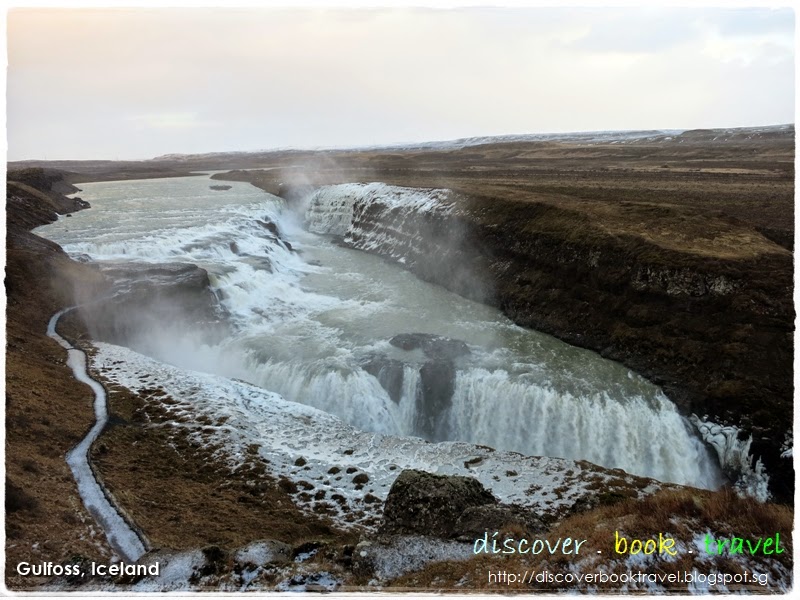 The partially frozen Gulfoss has less water rushing over its edges as compared to summer time.  But its frozen beauty makes up for everything else. 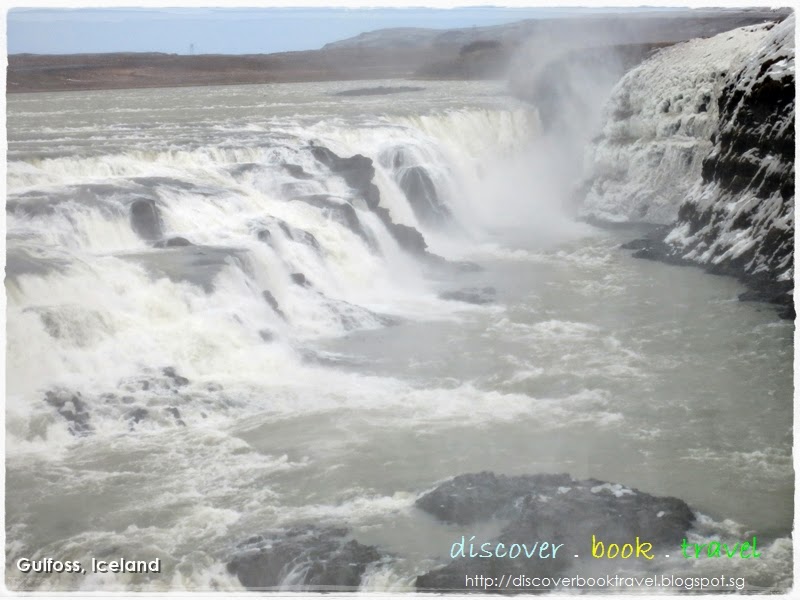 Climb to the top of the hill for a bird’s eye view of Gulfoss in its entirety! 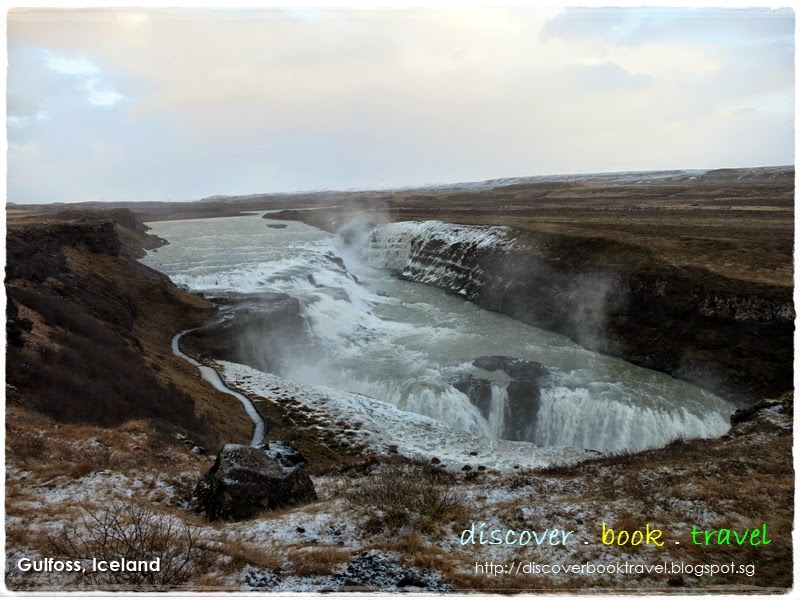 Among all the waterfalls that we visited in the western and southern part of Iceland (Hraunfossar and Barnafoss, Skogafoss, Systrafoss, and Seljalandsfoss), Gulfoss can indeed be said to be the most massive and the most beautiful, but the other waterfalls can be said to have a life and spirit of its own which makes them uniquely different.

How to get to Gulfoss?

Many travel agencies and bus companies offer daily tours to the Golden Waterfalls and the Geysir Area. The distance from the capital in Reykjavik is about 117 km.

Join us next as we check out the Geysers of Haukadalur.